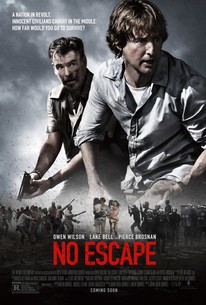 An intense international thriller, NO ESCAPE centers on an American businessman (Wilson) as he and his family settle into their new home in Southeast Asia. Suddenly finding themselves in the middle of a violent political uprising, they must frantically look for a safe escape as rebels mercilessly attack the city. Directed by John Erick Dowdle and written together with his brother Drew, NO ESCAPE stars Owen Wilson, Pierce Brosnan and Lake Bell. (C) Weinstein

News & Interviews for No Escape

Pierce Brosnan’s Five Favorite Films
On DVD This Week: Shaun the Sheep, American Ultra, Doctor Who, and More
The Perfect Guy Edges Out The Visit At the Box Office

View All No Escape News

Critic Reviews for No Escape

No Escape takes the casual xenophobia of something like Taken, crossbreeds it with something altogether more noxious, then asks us to kick back and enjoy the ride. We don't. We can't. And the ride isn't that great to begin with.

No Escape is as accomplished as it is vicious.

The thriller No Escape has one or two moments of brilliance interspersed with many very silly ones.

No Escape is bare-bones, shameless, and too obnoxious to stay suspenseful for long.

The film's technical sensibilities are as outmoded as its rotten worldview.

Stepping out of their known comfort zone, with No Escape the Brothers Dowdle deliver a high octane, heart pounding thriller starring Owen Wilson, Lake Bell and Pierce Brosnan...populat[ing] the film with edge of your seat nail biting tension

No Escape gets a questionable start but speeds to the finish for a win. It's the most intense and breathtaking movie of 2015, with a stellar performance from Owen Wilson.

No Escape feels like it was written by somebody who violently hates the entire Asian continent.

The counter-intuitive casting of Bell and Wilson pays off but it doesn't make big enough waves.

Perhaps Dowdle and his brother Drew didn't want to make the story too convoluted and complicated, but one can't help but think that this politically-charged thriller has a gaping missing piece.

The film continuously puts Owen Wilson in interesting scenarios and does so effectively. [Full Review in Spanish]

Audience Reviews for No Escape

A film that never got much advertisment and ends up being a very good film, We get about 5 of these a year, It's an edge of your seat action thriller that's kind of offensive in ways but still a great popcorn flick and it was nice to see Owen Wilson in a serious role for a change, The action was very good and full of suspense all the cast were great but Pierce Brosnan was brilliant but under used, The film has had some harsh reviews because critics don't like it when a film dares to step over certain lines, It's a film you watch enjoy then forget about.

Incredibly intense, No Escape is the story of a family's desperate fight for survival in the face of extreme circumstances. When Jack Dwyer moves his wife and kids to Southeast Asia after getting a job with an American company they get caught-up in a violent revolution and must find a way to get to the American embassy before they're captured and killed by the street mobs. Owen Wilson, Lake Bell, and Pierce Brosnan lead the cast, and give fairly good performances. And, the director uses some interesting slow motion techniques that intensify the action. Still, the pacing is rather slow in the first act, and the plot is pretty thin. Yet for a high-adrenaline chase film, No Escape works.

"No Escape" knows no subtlety. I was almost surprised that subtitles didn't appear throughout the movie notifying the audience of the messages and moments of pathos they were intended to perceive, in case those points were missed in the clunky script. It didn't help that the film's lead, Owen Wilson, was completely miscast -- unless a feckless, wimpy father was the hero Dowdle had in mind for his everyday American. If you are a fan of action and suspense who doesn't really care about characters or story, then the film might not be so bad for you. There are some exciting moments (even if they later succumb to the silly), so it's not a complete dud. Overall, "No Escape" is a completely forgettable film.

An American family is transferred overseas and a chance for a better life only to find themselves in the middle of a bloody anti-American revolution soon after their arrival. Wilson and Bell are not given much or long to convince us that they are a couple but by the conclusion you sorta feel that way, as if they are. Brosnan again tips his hat to that Brit spy background of his irreverently and to good effect. The politics might be slightly different nowadays, but there's enough residual feeling here to give the on the ground action a true punch, true feeling, and my palms were sweating throughout.