No Crossover: The Trial of Allen Iverson (2010) 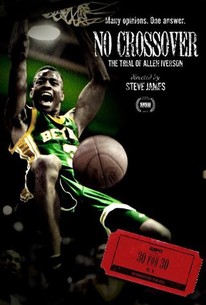 Years before he became a star in the NBA, Allen Iverson was a high school athlete in Hampton, Virginia who showed tremendous promise on both the football field and the basketball court. Iverson's talent had attracted the attention of a number of college and pro scouts, and a bright future seemed assured until February 19, 1993, when he and some friends went to a local bowling alley. Iverson and his friends, who were African-American, got into an argument with another group of young men, who were white. Iverson and his friends said the white youths shouted racial epithets at them, while the white students said that Iverson and his pals were harassing them in an arrogant manner. The youngsters got into a brawl, and while a videotape showed that plenty of punches were thrown by both sides, Iverson and two of his friends, Michael Simmons and Samuel Wynn, were the only ones who stood trial for the melee, in which Iverson was accused of striking a woman in the head with a chair. The subsequent trial became a major news story in Hampton, and divided the community along racial lines in a way no event had since the Civil Rights era. Award-winning filmmaker Steve James, who was born and raised in Hampton, examines the incident and its impact on Hampton and Iverson in the documentary No Crossover: The Trial of Allen Iverson. Produced for the ESPN cable network as part of their "30 for 30" documentary series, No Crossover was an official selection at the 2010 South by Southwest Film Festival. ~ Mark Deming, Rovi

Critic Reviews for No Crossover: The Trial of Allen Iverson

It's a wonderful film, one of the best of this terrific film series, and I highly recommend it.

James brilliantly investigates the seams of identity, race, and community strained by Iverson's trial, conviction, and subsequent pardon, with an added charge from his own ties to home.

A lot of 30 for 30 episodes deal with the uncomfortable realities of the racial conflicts and biases that run beneath organized sports, but No Crossover is the bluntest about how often the cheers for black athletes stop when they leave the court.

The film has the extraordinary quality of being simultaneously clarifying and murky, and that's just great journalism on James' part.

Score another win for vet filmmaker Steve James, who takes a personal approach to examining all aspects of a racially charged incident in his hometown of Hampton, Va., with "No Crossover: The Trail of Allen Iverson."

Lacking any substantial new discoveries about the case -- most participants, including Iverson, refused to give interviews -- James is forced to paint it from the margins...

As told by James and his crew, Iverson's story is a great American tragedy, a harrowing look into the gaping racial fault line that runs through America in general and Hampton, Virginia, in particular.

The film embraces the complexity and difficulty of race and racism, their circuitous legacies of pain and ambition. It also remain open-ended, as it must be.

There are no featured reviews for No Crossover: The Trial of Allen Iverson at this time.

No Crossover: The Trial of Allen Iverson Quotes