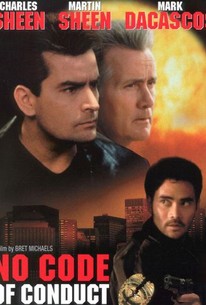 Martin Sheen and his son Charlie Sheen play father and son, appropriately enough, in this tense crime thriller. Bill Patterson (Martin Sheen) is a veteran police detective who works side by side with his son Jake (Charlie Sheen) in the vice squad. Both Bill and Jake share a dedication to their work that often gets in the way of their relationships with others. The job has put a wedge between Jake and his wife Rebecca (Meredith Salenger), and Jake also feels that he's starting to burn out, tired of living in the shadow of his better-respected dad. When a fellow vice detective is killed trying to crack a drug ring, Bill and Jake make it their personal responsibility to bring in the killers and take the drugs off the street. However, they quickly discover that they've severely underestimated the ruthlessness and brutality of the dealers (played by Tina Nguyen, Joe Lando, Courtney Gains, and Bruce Nelson) and that their lives are in great danger. No Code of Conduct was the first feature written and directed by Bret Michaels, who rose to fame in the 1980s as the lead singer with the popular rock band Poison.

Marjorie Harris
as Off. Johnson

Critic Reviews for No Code of Conduct

This paint-by-the-numbers film is overrun with washed-up stars in a movie that's doomed from the start.

Audience Reviews for No Code of Conduct

No Code Of Conduct is one of those rare action films that is very re watchable. Charlie Sheen is awesome as Jake Peterson, a custom built character for him. The action scenes were great and the end scene with all the pyro was awesome.

No Code of Conduct Quotes