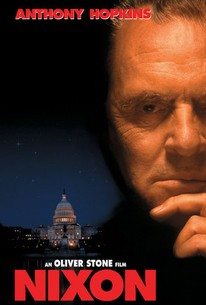 Critics Consensus: Much like its subject's time in office, Nixon might have ended sooner -- but what remains is an engrossing, well-acted look at the rise and fall of a fascinating political figure.

Critics Consensus: Much like its subject's time in office, Nixon might have ended sooner -- but what remains is an engrossing, well-acted look at the rise and fall of a fascinating political figure.

Critic Consensus: Much like its subject's time in office, Nixon might have ended sooner -- but what remains is an engrossing, well-acted look at the rise and fall of a fascinating political figure.

This big-budget, three-hour film chronicles the political life of one our country's most controversial presidents. Although Nixon disgraced himself with his involvement in the Watergate scandals, he was part of some of the latter 20th century's most important events, and this film presents a complex portrait of a complicated man.

Corey Carrier
as Richard Nixon at 12

Howard Platt
as Lawyer At Party

Harry Murphy
as Fan No. 1

Suzanne Schnulle Murphy
as Fan No. 2

Peter Carlin
as Student No. 1

Michelle Krusiec
as Student No. 2

Jon Tenney
as Reporter No. 1

Julie Araskog
as Reporter No. 2

Ray Wills
as Reporter No. 3

John Bellucci
as Reporter No. 4

Zoey Zimmerman
as Reporter No. 5

Clayton Townsend
as Floor Manager No. 1

John Stockwell
as Staffer No. 1

Charlie Haugk
as Staffer No. 2

As wayward and self-regarding as its subject, the film long overstays its welcome.

What it finally adds up to is a huge mixed bag of waxworks and daring, a film that is furiously ambitious even when it goes flat, and startling even when it settles for eerie, movie-of-the-week mimicry.

Without question, Nixon dwarfs everything in the American cinema since Schindler's List.

Nixon starts, like a horror movie, on a dark and stormy night, with the president prowling around a room of the White House like Dracula in his lair.

Nixon far overstays its welcome with an increasingly tedious final hour devoted largely to slogging through the minutiae of Watergate.

Stone had just come off of his blast of overcooked insanity Natural Born Killers, and he applies some of that rebellious invention to this otherwise sober undertaking.

Stone's newfound timidity in both style and content -- this appeared after a 10-year stretch that included the high-powered likes of Platoon, JFK and Natural Born Killers -- marked it as the beginning of the end of a remarkable run.

You could say that Nixon is Oliver Stone's Citizen Kane, and not necessarily mean it as praise.

The filmmaker's deftness at evoking theme and sentiment through editorial montages within individual dramatic scenes reaches an apotheosis here.

It's clear that Stone hates Nixon with a capital H.

A complex, mesmerizing look at the life and presidential career of the much maligned Richard Nixon (Anthony Hopkins), including his working class upbringing, his devastating loss to Kennedy in his first presidential race, and ultimately how the Watergate scandal destroyed his career and the successes he had while in office. Hopkins is absolutely phenomenal in one of his most subtlety brilliant performances, as his body language, facial expressions, and how he delivers his dialogue fully demonstrate the many insecurities Nixon had about himself and his legacy, as well as his desire to be as loved as Kennedy was. Director Oliver Stone adds his share of controversy to the story, but states in the beginning of the film that this is a dramatic interpretation of the life of Nixon, and in terms of how the film is constructed as a drama and not a historical biography, it accomplishes its job more than well. The acting all around (especially Joan Allen as Pat Nixon) is outstanding, and while the film does lose a little steam near its conclusion, it remains undeniably arresting throughout its entirety.

I will admit, Anthony Hopkins does not look like Nixon, but after the first couple scenes this aesthetic problem becomes void. Not only does Hopkins nail the mannerisms of the historical figure, but gives a deep and compelling humanity to the character. Director Oliver Stone delivers a tad un-even but very epic and ambitious biopic that leaves no part of Nixon's life un-explored. Stone mostly succeeds in portraying the controversial historical figure with nice objectivity and showing the dirty underbelly of politics. Although the film runs at a whopping 3 hours, Stones tight editing and visceral (almost hallucinatory at times) direction keeps the pace in check. Hopkins performance, along with the film's great supporting cast, alone make the 3 hour runtime worth it.

Hopkins is a monster. He does a truly larger than life performance, even if the megalomaniacal and mythomaniac Oliver Stone tries to pass his own paranoia to the Nixon character, Hopkins succeeds in retaining not only the madness but the candor and humanity only seen and heard from a Shakespeare monarch. Overlong and hallucinatory but dense and ultimately compelling approach to one of the most controversial figures who swam and almost drown in that stormy and treacherous shithole called politics.