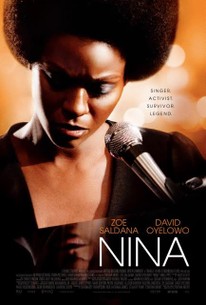 Critics Consensus: A wholly misguided tribute to its subject's searing talent and enduring impact, Nina is the cinematic equivalent of a covers project featuring all the wrong artists.

Critics Consensus: A wholly misguided tribute to its subject's searing talent and enduring impact, Nina is the cinematic equivalent of a covers project featuring all the wrong artists.

Critic Consensus: A wholly misguided tribute to its subject's searing talent and enduring impact, Nina is the cinematic equivalent of a covers project featuring all the wrong artists.

She was one of the century's most extraordinary talents, a 15-time Grammy nominee and Grammy Hall of Fame Recipient her mesmerizing songs and passionate politics combined to make her the unforgettable Nina Simone (Zoe Saldana). But fame and fortune came with a price, and her later years were riddled with depression, alcohol abuse and isolation. Rediscovering the meaning of her life and work took courage, strength and one true friend: Clifton Henderson (David Oyelowo), the man who started out as her assistant and eventually became her loyal manager. With Clifton's encouragement, the "high priestess of soul" began a courageous journey back to her music ... and, eventually, herself.

Ben Latham-Jones
as Frenchman on Moped with Baguette

The Huntsman: Winter’s War Gets A Chilly Reception

Respectfully factual in its over-all contours but sensational and sentimental nonetheless, the movie reduces Simone's life to clichés about hope; it replaces the creative drive with the commercial one, the artist with the celebrity.

Saldana does a fine job of delivering the lyrics -- a daunting task for any actress required to step into those vocals, but fans of Simone will be aching for the real deal.

A Nina Simone novice seeing this picture would have no idea who this complex, magnificent artist was, or why she mattered.

Why Mort, who wrote and directed the film, has chosen to focus on Simone's troubled 1990s period in France is anyone's guess.

The word on this Nina Simone biopic has been so toxic for so long - it was filmed in 2012 but only released now - I was really hoping to find something good in it. No luck.

Nina feels like a movie made by people who fundamentally misunderstood Nina Simone. It conclusively proves that representation behind the camera is as important as representation on screen.

The prevalence of his crude symbolism begs the question of whether the imagery is meant to buttress a childlike worldview, or whether the filmmaking itself underestimates the viewer's intelligence.

This film had a great opportunity to take a once-in-a-lifetime story about a troubled, legendary singer, and add insight. Nina, in the most frustrating way, bungles that mission.

If this is a greatest hits album, Nina picks the least-accessible songs and then puts them all in the wrong order.

An insult to the legacy of the High Priestess of Soul, those looking for a richer exploration of the woman, artist, activist and legend, are best served elsewhere.

While Saldana gives her very best in trying to embody the essence of Miss Simone with equal support from co-star David Oyelowo, both are confined to a weak script and for Saldana, probably the worst makeup job she's had on the big screen.

There are no featured audience reviews yet. Click the link below to see what others say about Nina!