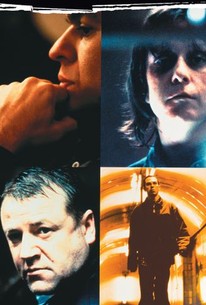 Terry Rowley
as M.C. in Club

John Blundell
as Man with Knife

News & Interviews for Nil by Mouth

View All Nil by Mouth News

Critic Reviews for Nil by Mouth

Nil By Mouth offers a harrowing look at a working-class family beset by drugs, alcohol and abuse.

Something primal, needful and anguished is going on here.

There's so much authenticity and raw emotion here that most viewers will be able to excuse the fact that they don't understand any of the dialogue.

Imagine a movie where every character is played by Gary Oldman, in the drunken overacting Oldman mode. Oldman's unfocused and self-indulgent directorial debut has moments of poignancy and insight, but not enough to make it endurable.

Oldman creates an uncanny documentary feel for his fictional story that draws you in despite the misery unfurling onscreen.

Audience Reviews for Nil by Mouth

'Nil By Mouth' is a potent, relentless dose of real life; a portrait of the dead-end cycle of violence, abuse, addiction and poverty that occurs in cities all over the world. Though a trifle convoluted (there are a few scenes that contribute little or nothing to the film), it is a genuinely moving, visceral experience. Don't be mistaken, this is not another trashy British gangster flick, far from it. Ray Winstone(Ray) and Kathy Burke (Valerie) are both tremendous, their performances stop the film from descending into the realm of 'The Football Factory' or 'Rise of the Footsoldier'. It's also the script that distinguishes it from such films which, on face value, appear comparable. The script has ample profanity, and I really mean ample, it's the most profane film I've ever seen, but it also has segments of real poignancy. Burke and Winstone interpreted the script perfectly. Winstone's performance is unsettlingly convincing; some may say he's one-dimensional, but he really is a rather good actor. It is Kathy Burke's moments that are the most moving, chiefly a scene where she desperately tells a white-lie: it's genuinely upsetting. The film is rightfully spared of romanticism, it's completely devoid of poetic licence, what you see is pure, candid realism. Ironically, the film isn't pure at all, it's gritty and unrestrained in its depiction of violence and vulgarity; one moment being particularly horrifying. To criticise the film for being 'unfocused' is missing the point. To me, it was an almost non- linear insight into the human condition, a film woven from the personal experiences of Gary Oldman and delivered with the utmost conviction from Burke, Winstone and indeed the whole cast.

Dark and violent but packed with unflinching honesty and grit.

The words "gritty", "British" and "drama" usually and rightfully condemn a film to the Guy "Windsor" Ritchie hall of excrement . Having seen these terms applied to Oscar contenders like "Goodbye Charlie Bright", "Rancid aluminium" and "Love, honour and obey", I wasn't really expecting much from this film. Saying I was wrong would be a huge understatement. "Nil by Mouth" is an awesome achievement. A razor sharp dissection of a working class south London family that delivers the required punch on so many levels that you need to have a wash after watching it. It covers a vast spectrum of emotions that will see you (especially if you're British) laugh, cry and more often than not, hold your head in despair at witnessing an all too true account of what it is to be at the bottom of the British class system. It is unflinchingly brutal and somewhat depressing, yet at the same time shows how with guts, determination and a healthy sense of humour, people can survive even the most bleak and hopeless of situations. Kathy Burke is outstanding and Ray Winstone is dependable as ever, but Gary Oldman's screenplay and direction are the stars of the show. This script could stand on it's own as a fine social commentary on par, and not dissimilar from John King's "The Football Factory" and "Headhunters". Thankfully Oldman has also realised that in terms of direction, "gritty" does not have to mean the static, cold and quite frankly boring as hell style that so many British films have. The camera moves with a documentary feel energy, yet the slick cinematography keeps it from ever looking cheap. Quite simply one of the greatest British films of all time.

Bringing Gary Oldman back to his roots, his Directional Debut is a natural, well acted, realistic piece where he's used the number one rule; stick to what you know. Oldman uses a list of the usual suspects and close group of Actors with Ray Winstone, Kathy Burke, Jamie Foreman, Charlie Creed-Miles and not forgetting his own sister Laila Morse. People who find bad language will find this film offensive as it is heavily laiden. The more this film is watched, the more you come to realise that it's not about drugs alone, this film (if anything could be summarised from it) is about addiction, whether that be drugs, drink, violence etc etc, it's a generational inheritance and a cycle not easily broken. The film builds up from a slow start and with little very structure to the storyline, I'm sure some people will find it hard to stick with, this is much more of a fly on the wall kind of Drama, looking at a section of one families lives during a time period. For some this will open eyes, for others it may be a little too serious and for some perhaps a little all too real.