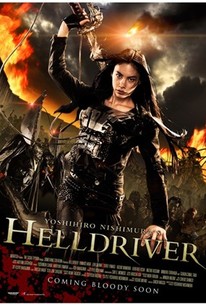 A mysterious mist traverses through northern Japan, turning its inhabitants into zombies. Kika, a high school girl with a chainsaw, recruited by the government enters the zombie infected zone, along with a small group of companions to take out the zombie queen.

"Helldriver" is a film addressed to very few, but fans of Nishimura and slapstick splatter are bound to enjoy it.

Bloody sicko in this Japanese zombie flick I ever seen that made me almost vomit and sometimes closed my eyes on the sicko scenes what zombies were doing.

"Everything is glorious!" These kind of ultra-violent, chaotic Japanese movies are very tricky. When they work, they're awesome. An amusing, bemusing, exciting mishmash of craziness that gives new meaning to the word "ridiculous". But Helldriver, like so many of these gonzo films, just doesn't quite pull off what it's aiming for. And that's certainly not for lack of trying. This tale of zombies and chainsaw swords throws everything at the viewer possible, and I have to commend the filmmakers for the sheer levels of WTF they came up with. Zombie women using zombie babies attached by zombie umbilical cords as weapon, truck versus zombie sword fights, and a zombie car are just a few of the insane ideas you'll see on display, here. I can't count the number of times I simply had to shake my head and smile at the fact that someone came up with all of this stuff. There's even a battle near the end that's eerily reminiscent of The Battle of Helm's Deep in The Two Towers, except with way fewer humans and WAY more blood. The inventiveness of Helldriver is the best thing it has going for it, by far. But amidst all the blood fountains and giant flying zombies made out of smaller zombies, the director and writers forgot to add the entertainment. How a movie can be absolutely insane and so dull at the same time is a mystery, to me. The plot is non-existent, even for this kind of flick. Our main character has a back-story with an evil mother and uncle that leads to the entire zombie infestation and her transformation into a half-mechanical warrior, but the scenes dealing with that are among the most boring in the entire movie. There are really no likable or interesting characters, either, which would have gone a long way towards making Helldriver easier to enjoy. It might be worth checking out for the undeniable strangeness of it all, but I still have to say I was more disappointed than pleased with Helldriver.

More over the top antics from Sushi Typhoon. If you're a fan of Machine Girl and RoboGeisha, you'll likely find something to enjoy here.

There isn't much detail to the story, as all the abstractness and over the top fun is just there to be accepted. Heck, the opening title and credits don't appear to at least a third of the way into the film. For what the story has to offer, the 105 minute run time is a bit long. The film indulges in long drawn out gore sequences and blood showers to pass the time between plot movements.

The violence dishes out the pain in all manners. Buckets and more buckets of blood shoot into the sky, canvas the floors, and soak the cameras. Sure, it is unrealistic, but that is exactly what this picture goes for. Outrageous violent behavior and over the top deaths. The action is somewhat hindered by shaky closeup camerawork and mediocre CG, but in the grand scheme of things, it is acceptable.

To add to the fun, many characters are out of the ordinary, annoying, or just a waste of time. They are also overacted. Yumiko Hara is one of the few that holds herself in check and doesn't get to wild with her character. Eihi Shiina is underused; however she does do a reasonable job.

To sum it all up, Helldriver puts a lot of attention on the extreme and not enough on the characters and story. Chainsaw anyone?