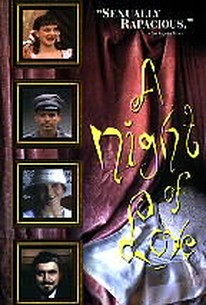 Dusan Makavejev has adapted Emile Zola's short story, "Night of Love" to film in his typically irreverent, cheeky style. The story begins as two characters simultaneously arrive in a small Central European town: Avanti's there to make certain the new king's hunting trip goes smoothly, while Svetlana has returned home for the opposite reason -- she plans to assassinate the monarch. But both parties get sidetracked by erotic encounters. He's charmed by an ice-cream-selling nymphet (and caught while trying to seduce her), while Svetlana renews an affair with a surly manservant who had taken her as a young girl. When each these trysts culminates in a wild brouhaha, the two grab the next train out of town... where they finally meet, and push all thoughts of the king aside in favor of lust.

Critic Reviews for Night of Love

There are glimpses of Makavejev's past exuberance, with dollops of wild sex and delicious photography, but the final impression is of a project too long delayed and heavily compromised.

Dusan Makavejev's 1988 comedy, his first film to be shot in his native Yugoslavia in 18 years, was easily his most pleasurable work since WR: Mysteries of the Organism.

Makavejev has created an entertainment that may just tweak the minds of the masses.

Explores some of the dangers and a few of the pleasures of living in the ivory tower world of art.

The problem is that everyone is trying too damn hard to get a laugh.

There are no featured reviews for Night of Love at this time.