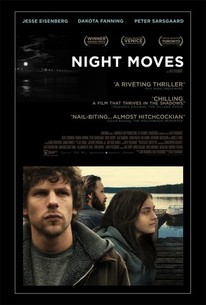 NIGHT MOVES, the fifth feature film from acclaimed filmmaker Kelly Reichardt, is the story of three radical environmentalists coming together to execute the most intense protest of their lives: the explosion of a hydroelectric dam-the very source and symbol of the energy-sucking, resource-devouring industrial culture they despise. Harmon is a Marine veteran, radicalized by tours of duty overseas. His life in the military is behind him, but at heart he remains the same reckless alpha male he always was, eager for adventure, excited by the prospect of mayhem and destruction. Dena is a high society dropout, sickened by the consumer economy into which she was born. She's moved west and cut ties with her family, edging ever deeper into radical politics. And Josh, their leader, is a self-made militant, devoted to the protection of the Earth by any means necessary. A son of the middle class who works on an organic farm, he's an intensely private person by nature and may have the deepest convictions of them all. NIGHT MOVES is a tale of suspense and a meditation on the consequences of political extremism. When do legitimate convictions truly demand illegal behaviors? What happens to a person's idealism when they find their back against the wall? (c) Cinedigm

Gavin MacCartney
as Kid at Campground

Jonah Goergen
as Kid at the Lake

Oliver Goergen
as Kid at the Lake

Jackie Apodaca
as Woman at Spa

Succeeds mightily when it comes to creating tension but struggles a little more with making its plot run together smoothly.

I'd say this is a movie about alienation that, in the spirit of the boldest activism, isn't afraid to be ostracized itself. You may beg to differ, and I'd say that's the point.

Virtually every shot feels like it adds to Reichardt's vision and it draws so tightly together that by the end, the only people left accessible to the likes of Josh are those in the watching audience. Night Moves makes you an accessory.

It's an unconventional thriller, more interested in character than plot, but gripping as both.

There certainly isn't any extraneous action in Night Moves. But it is precisely its leanness and the tight focus of its storytelling that make it such a tense thriller.

Reichardt probes away at her characters' motivations and contradictory feelings. She doesn't judge them, but makes it very clear how quickly their idealism becomes muddied once they dirty their hands with direct action.

Night Moves is defined as one of the most original films in its class. [Full Review in Spanish]

NIGHT MOVES exerts a boa-like grip on the audience, coiling the film tighter without the viewer noticing until the peril and consequences feel much more imminent.

Eisenberg delivers one of his best performances since The Social Network.

The last time Reichardt took a crack at a genre film it was the western with Meek's Cutoff, which worked wonderfully. This time I think she simply picked the wrong area to work with.

This gripping film eschews typical tropes and character archetypes in favour of gradually wrenching the audience's collective stomach with a building tension.

It does a great job letting us slowly find out what it is about instead of resorting to exposition, but what could have been a thought-provoking story about ecoterrorism and environmentalism turns out to be a sterile thriller with a frustrating, utterly predictable second half.

It is a very slow paced thriller drama directed by Kelly Reichardt and written by Reichardt and Jonathan Raymond. Interestingly directed, it had lots of substance which gets even better with the stars Jesse Eisenberg, Dakota Fanning, Peter Sarsgaard, Alia Shawkat, and James LeGros. Another of the films shown in the main competition section of the 70th Venice International Film Festival and at the 2013 Toronto International Film Festival which definitely needs a special attention! The story of three radical environmentalists - Josh, Dena, and Harmon, who are teaming up to execute the most spectacular direct action event of their lives: the explosion of a hydroelectric dam, was more story based and the actors were wisely chosen to make that story more effective. Regarding the story, Edward R. Pressman Film filed a lawsuit in September 2012, demanding that filming cease because of too many similarities to Edward Abbey's novel The Monkey Wrench Gang, planned to be adapted into an authorized film by Henry Joost and Ariel Schulman. Kelly Reichardt did a good job, but I wish it was outstanding! There was plenty of room for improvement, but even this was more than enough for a happy audience. The only problem I really had was the ending. Some people claim that it was a smart decision to live the ending to the viewer, but to me the feel was that something was simply unfinished!

From Jesse Eisenberg at his best, to Dakota Fanning proving she is a worthy actress, you would think that a film like "Night Moves" would have much more to offer than just that, but that is really all I got out of this film in terms of enjoyment. The cinematography is great and the director did an amazing job with the cast, but the story was just not interesting or exciting enough to justify these elements which ended up grabbing my interest and losing it in a matter of minutes periodically throughout this film. In no way is this a bad film, in fact, I can see how some people would call it a masterpiece, but it is a very slow moving picture with little else to offer than technical aspects and great performances. "Night Moves" had a screenplay that did not take any risks and that bothered me a lot. Overall, it is a very well-constructed thriller that I probably will never watch again.

In her own low key way, Kelly Reichardt continues to move away from character driven movies to more plot driven ones with her latest film "Night Moves." While not entirely successful, she does make a couple of good points about the trouble that saboteurs and terrorists have in trying to get their points across to the general public with their violent acts. On a much more personal level than the plot to bomb a dam in Oregon, there is the trouble that Josh(Jesse Eisenberg) has in communicating his feelings toward Dena(Dakota Fanning), his fellow conspirator, along with Harmon(Peter Sarsgaard), an unreliable veteran, known. In any case, Eisenberg has no trouble conveying his character's emotions without that much dialogue. But that same low key approach can also work against the movie which does not so much end, as just sort of runs out of gas eventually. Another example would be a key scene that while at first might seem disposable is actually a flashback to the first time Josh meets Dena. It is at a screening of an environmental film. During the Q & A, Dena asks the filmmaker what she can do. It is Josh, scowling in the corner before this, who does have an answer for her.