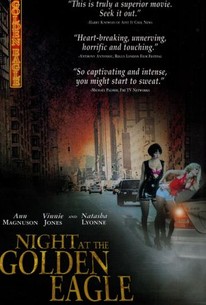 Night at the Golden Eagle Photos

A pair of elderly career criminals may have ended their old lives before they can start a new one in this streetwise drama. Tommy (Donnie Montemarano) and Mic (Vinnie Argiro) are a pair of aging wiseguys who used to work on the fringes of the New York mob. Now in their mid-sixties, Tommy has just been sprung from prison after spending seven years behind bars, and Mick has offered to put him up at his place -- a room in a seedy Los Angeles flophouse called the Golden Eagle, which is overrun by junkies, streetwalkers, and bums with no where else to go. While Tommy's been in stir, Mick has been living the straight life; he's gotten a legitimate job, quit drinking, stopped doing business with prostitutes, and has saved up enough money that he and his best friend can head to Las Vegas and start new lives with real jobs there. However, Tommy isn't so sure he wants to live quite so clean, especially on his fight night out of the joint. Tommy meets another resident of the Golden Eagle, Amber (Natasha Lyonne), an attractive young woman who happens to be a hooker. Not having been with a woman for seven years, Tommy is eager to retain Amber's services, but Amber is working for Rodan (Vinnie Jones), a brutal and short-tempered pimp. Tommy's treatment of Amber manages to anger Rodan, and now Mick and Tommy have to get away from the pimp if they have any hope of getting to Las Vegas (and out of Los Angeles) alive. A low-budget labor of love for director Adam Rifkin, A Night at the Golden Eagle's supporting cast includes James Caan, Ann Magnuson, Sam Moore (of the popular singing group Sam and Dave), Fayard Nicholas (of the legendary dance team the Nicholas Brothers), and Francesca 'Kitten' Natividad.

Badja Djola
as Gabriel
View All

Critic Reviews for Night at the Golden Eagle

One just waits grimly for the next shock without developing much attachment to the characters.

Never decides whether it wants to be a black comedy, drama, melodrama or some combination of the three.

The director seems to take an unseemly pleasure in [the characters'] misery and at the same time to congratulate himself for having the guts to confront it.

Another in-your-face wallow in the lower depths made by people who have never sung those blues.

A modest pleasure that accomplishes its goals with ease and confidence.

What little grace [Rifkin's] tale of precarious skid-row dignity achieves is pushed into the margins by predictable plotting and tiresome histrionics.

This is a dark, gritty, sometimes funny little gem.

Nothing about the stories in and of themselves is particularly original, but Rifkin knows how to create atmosphere.

These are textbook lives of quiet desperation.

Too bad writer-director Adam Rifkin situates it all in a plot as musty as one of the Golden Eagle's carpets.

Rifkin no doubt fancies himself something of a Hubert Selby Jr., but there isn't an ounce of honest poetry in his entire script; it's simply crude and unrelentingly exploitative.

It's Tommy's job to clean the peep booths surrounding her, and after viewing this one, you'll feel like mopping up, too.

Audience Reviews for Night at the Golden Eagle

Great performances, andnice atmosphere really set the mood here, but it is somewhat ponderous, making it a little tedious to watch at times. Still good though, despite that.

Night at the Golden Eagle Quotes