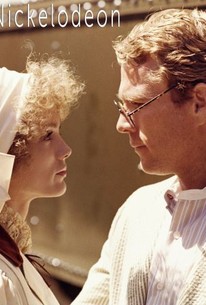 Before making this tribute to the brilliant, haphazard early days of Hollywood filmmaking, director/screenwriter Peter Bogdanovich interviewed several veteran filmmakers including John Ford, Raoul Walsh, Allan Dwan and Howard Hawks. Their reminiscences, though not enacted literally onscreen, provide Nickelodeon with its soul. The plot tells the story of a lawyer who is roped into becoming a director and an aspiring actor who becomes a star in the early silent era. Despite their early stumbling and fumbling, the two become quite successful and this creates a whole new set of problems.

Peter Bogdanovich's film is an okay comedy-drama about the early days of motion pictures.

Bogdanovich is trying to do an interesting and commendable thing in dramatizing aesthetic passion; his failure is as noble as it is conspicuous.

The direction is agonisingly pedantic for a comedy, and leaves O'Neal and Reynolds totally exposed, mugging away in charmless and clumsy fashion.

Peter Bogdanovich knows a great deal about movies, including how they are made. Perhaps he doesn't know why they are made. In any case, knowing how something is made isn't the same as making it.

We're reminded that Orson Welles described a movie studio as the biggest electric train a kid could ever get. Bogdanovich doesn't let us play with his train. Instead, he keeps us on the outside of a curiously flat movie.

If nothing else, it truly shows Bogdanovich's love for movies.

The movie is too busy racing backwards, and outside of one lovely sequence... the movie races in every direction and goes no place at all.

The script and direction are so abominable that D.W. Griffith couldn't have saved the picture.

As an homage to the start of the film industry, this extravaganza is quite a tribute, but as a motion picture it's sadly lacking.

A clunker of a comedy from Bogdanovich that aims high and misses by a mile.

I caught the ending of this movie on TV, I'd been wanting to see it for some time, and I liked it, but I really want to see the rest of the movie.