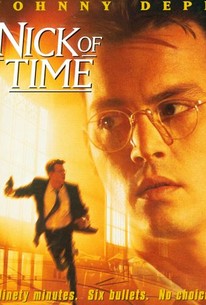 Critics Consensus: It isn't the worst '90s action thriller, but by bungling a story pitting Johnny Depp against Christopher Walken, the rote Nick of Time ranks among the most disappointing.

Critics Consensus: It isn't the worst '90s action thriller, but by bungling a story pitting Johnny Depp against Christopher Walken, the rote Nick of Time ranks among the most disappointing.

Critic Consensus: It isn't the worst '90s action thriller, but by bungling a story pitting Johnny Depp against Christopher Walken, the rote Nick of Time ranks among the most disappointing.

A stranger pulled into a deadly scheme races against time to save his daughter in this thriller. Gene Watson (Johnny Depp) is an accountant who comes to L.A. with his ten-year-old daughter Lynn (Courtney Chase) to attend a funeral. On the street, Gene and Lynn are pulled aside by Mr. Smith (Christopher Walken) and Ms. Jones (Roma Maffia), who flash what look like police badges and usher them into a van. Gene soon discovers that he's been kidnapped, and his captors have an unusual demand -- if Gene does not murder Gov. Eleanor Grant (Marsha Mason) within 75 minutes, his daughter will be killed. Gene now has just an hour and a quarter to tip off the authorities, spare Gov. Grant, and find out what Smith and Jones are trying to do, along with saving his daughter's life. He finds a much-needed ally in one-legged shoe-shine man Huey (Charles S. Dutton). Most of the action in Nick of Time occurs in "real time," meaning that the passage of time on screen matches that of real life, as the frequent shots of clocks and watches will attest.

Tom Bradley
as Himself

News & Interviews for Nick of Time

The Comic-Con is Coming!
"24" to Make the Leap from TV to Multiplex?

View All Nick of Time News

Critic Reviews for Nick of Time

The most preposterous movie in theaters isn't the Ace Ventura sequel (or even Money Train) but this wanna-be nail-biter.

Fair enough if the film isn't going to be a cerebral treatment of its real-time hook, but, for the most part, it fails in its more simple and pulpy remit to thrill.

...a solid thriller that neatly and efficiently gets the job done...

An exciting albeit illogical tale of mystery and suspense...

A fast and furious 90 minutes that doesn't waste a second.

Depp... is very visibly bored with this blatant bid for mainstream action stardom.

What is Depp doing in this tepid thriller?

Depp and Walken. What else matters?

Audience Reviews for Nick of Time

A very average movie, a political conspiracy Thriller, with a corny plot. No Johnny Depp stamp on this one and not one he'll be remembered for, watchable, but very forgettable

I forgot about it as soon as I saw it.

"Kisses to you. - No, kisses to you!" John Badham, the director, has had some moderate success in the 70's and 80's. 'Saturday Night Fever', 'War Games' and 'Stakeout' just to name a few. Nowadays he's making a career at the TV industry and I'm pretty sure that 'Nick of Time' has something to do with it... Don't get me wrong! This movie has some good elements. First of all comes in mind that the movie is shown in "real time". I can't really think of that many movies that are made like this. 'Vantage Point' and 'Phone Booth'? And of course now Jack Bauer on TV in '24'... But the problem with this movie is that it doesn't fee like a movie but more like a 90 minute long TV film. It doesn't have "big screen" written on it. The action is pretty lame and there's like no tension at all. And come to think of it, the story ain't that good either... But what saves this film from sucking ass is Christopher Walken. He manages to overact once again but in a good way... Like always. Johnny Depp shows glimpses of his star ability but the rest of the cast are mostly unknown to me or familiar from different TV shows. Don't get me wrong (again), I like good TV just as much as the next guy but this isn't a film that should be given major release because it just doesn't have the key elements for that. So, in my opinion, 'Nick of Time' is recommended only for Depp or Walken fans.