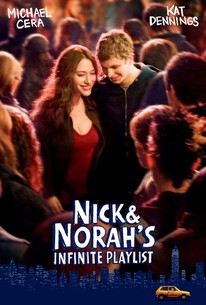 Michael Cera and Kat Dennings star as two lonesome teens who make a love connection as they prowl the streets of New York looking for their favorite band's secret show, as well as for their drunk friend Caroline. Norah is sick of being the doormat for her catty friend Tris, so rather than look like she's arrived at yet another concert without her unreliable ex-boyfriend-with-benefits Tal, she grabs a stranger and pretends he's her date. Unfortunately, that stranger is Nick -- whom Tris just dumped. Oddly enough, though, Nick and Norah seem to have a real connection. But is Nick still too hung up on the princess? The only way to find out is to spend all night combing Manhattan in a yellow Yugo.

Jonathan B. Wright
as Lethario

Randy Haines
as Randy, Are You Randy band member

Sammy Marc Rubin
as Sammy, Are You Randy band member
View All

Nick & Norah's Infinite Playlist takes everything you loved in three decades of teenage romance and twists it into something unrecognisably desperate and exploitative.

This music-powered hipster romance is as simple and undemanding as a three-chord pop song. It's as corny as rhyming "moon" with "June".

We allow the movie its fantasy of first love, if not its pretence of indie credibility.

It's all very sweet and there's no mistaking how the film's going to end. But it's also smart, funny and further proof of Michael Cera's comic talent.

As romantic comedies go, Nick and Norah actually manages to hit both the emotion and the humour on the head.

Because this is just another romantic comedy, given a youth-audience spin, there's nothing much going on. It's got the standard slovenly agenda of shoving the two hetero leads together because they've always gotten shoved together...

[Kat Dennings] imbued the character [of Norah]-a role that could have very easily waded into stock character territory-with an achingly poetic depth and explosive comedic bite.

It's a movie for our times and maybe a sign that despite the turbulence in the air, sweetness prevails in American Teenland.

Even if the bare-bones story strums at cliche like a three-chord riff, these two innocent old souls seem utterly original.

What makes the film so endearing is its genuine plausibility.

Anything with Ari Graynor is money

ive heard enough asian jokes and gay jokes, so the gay asian just annoys me. and also Michael Cera is in a band called the Jerk-offs. In 7th grade im sure i would have loooooved that.

This was a very fun movie. I thought the story was good enough...although I never understood what the slutty girlfriend saw in Nick--she was supposed to be "using" him, but for what? His mix tapes? She threw them away. Although I understood that she wanted him back because he was then interested in Norah and she couldn't have that! Anyway, I think Cera makes a great teenage boy lead, kind of reminds me of John Cusak: they are both good looking enough, nice guys etc. the kind of boys you wish your daughter would find and manage to keep. Anyway, nice diversion on a snowy night.