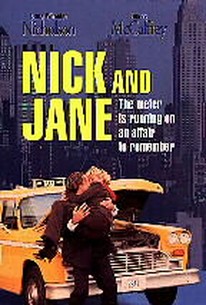 With nods in direction of Picture Perfect and Pretty Woman, this romantic comedy opens with classy corporate executive Jane (Dana Wheeler-Nicholson) discovering her boyfriend/colleague John (John Dossett) in bed with another woman. Exiting into the New York night, she grabs a rundown Checker cab, driven by Nick (James McCaffrey). Jane's friend Vickie (Lisa Gay Hamilton), who thinks Jane should make John jealous, hatches a plan that would give taxi-driver Nick a fake executive background with an alias, "Nolan Miller." Falling for this, John suggests Jane invite Nolan to the annual company luncheon. Jane promises Nick an easy $1500 if he will go through with the charade, and he agrees. Then comes the gender-switch on Pretty Woman as Nick gets a Madison Avenue makeover. By this time, naturally, Jane is realizing she's attracted to Nick, and events become triangulated.

Critic Reviews for Nick and Jane

Not much of the humor works at all, and there aren't many sparks generated by the putative, last-reel lovers Wheeler-Nicholson and McCaffrey.

There are no featured reviews for Nick and Jane at this time.