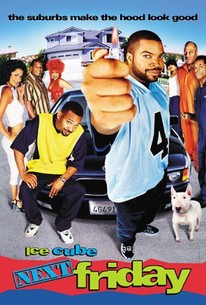 Critics Consensus: Next Friday lacks the fun of the original Friday. The movie is messy and plotless and relies on unfunny vulgar gags.

Critics Consensus: Next Friday lacks the fun of the original Friday. The movie is messy and plotless and relies on unfunny vulgar gags.

Critic Consensus: Next Friday lacks the fun of the original Friday. The movie is messy and plotless and relies on unfunny vulgar gags.

In this sequel to the urban comedy Friday, rap music star Ice Cube returns as Craig Jones, a streetwise man from South Central Los Angeles who has a knack for getting into trouble. This time out, Craig is still trying to outsmart neighborhood bully Debo (Tommy "Tiny" Lister Jr.); after Craig gets the better of Debo in a fist fight, Debo is determined to flatten Craig in a rematch. Looking to stay out of Debo's way, Craig decides that it would be a good time to visit his cousin (Mike Epps) and uncle (Don "DC" Curry), who have recently won the lottery and moved into a spacious new home in the suburbs. Like Friday, Next Friday was written by Ice Cube and his frequent musical collaborator DJ Pooh; music video director Steve Carr made his feature debut with this film.

Lady of Rage
as Baby D

The Lady Of Rage
as Baby-D

Carmen Serano
as Girl No. 1

Maria Arce
as Girl No. 2

Vanessa White
as Girl No. 3

Michael Blackson
as Customer No. 1

David Waterman
as Sheriff No. 3

Keebo
as Pinky Chaffeur
View All

News & Interviews for Next Friday

View All Next Friday News

Critic Reviews for Next Friday

If the first film was such stoned, dumb fun it felt illegal, Next Friday reminds us of the dangers in returning to the scene of the crime.

The pic is too larky and goofy to come across as mean-spirited.

Cube walks through this picture in an unconnected, unfunny daze, torching what is obviously a great talent in pursuit of cheap laughs and big box office.

The flick could use Chris Tucker, co-star of the first Friday, AWOL in the sequel. He probably took a look at the script and realized this sequel was no reason to shout, 'T.G.I.F.'

It delivers the same brand of cheap laughs.

Sadly, Epps's effort to replace Tucker as Cube's sidekick only downgrades the sequel. Otherwise, Next Friday has more of everything -- More importantly, however, Next Friday packs in more gags than the original.

[Cube abandons] the heavy-on-dialogue rhythm in favor of needless subplots rife with hijinks.

Still, in the Wayans Brothers tradition, a few of the vignettes are savvy and effective.

Most of the characters are so foolish and short-sighted that they can't see beyond the last puff of the fattie they're smoking.

When you feel like you have to explain the pop culture references in your gags, your movie is in trouble.

Audience Reviews for Next Friday

Although far less memorable than the original, Next Friday still is able to produce some laughter, even when the film is obviously inconsistent, immoral and offensively gag-filled. 4/5

A half wit follow up to a semi-descent movie. When Chris Tucker won't sign up for a sequel, it's usually a bad sign. Mike Epps was a horrible addition to the cast, reducing everything to bad punchlines. While it does have some good elements, the bad certainly outweighs the good.

Probably the weakest out of the trilogy, but still not that bad. The Mexican guy is super-annoying and very stereotypical, but a break from the big-as-fuck villains like Deebo and Damon. Epps is a nice change of pace from Tucker.