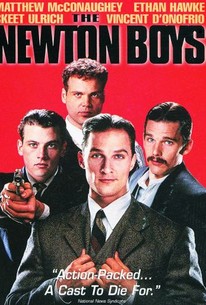 Critics Consensus: The Newton Boys uses a sharp cast and absorbing period detail to help make up for the frustrations of a story puzzlingly short on dramatic tension.

Critics Consensus: The Newton Boys uses a sharp cast and absorbing period detail to help make up for the frustrations of a story puzzlingly short on dramatic tension.

Critic Consensus: The Newton Boys uses a sharp cast and absorbing period detail to help make up for the frustrations of a story puzzlingly short on dramatic tension.

Richard Linklater's fifth feature is a major departure from his previous work -- his first big-budget picture, it's also the first of his films since his 1987 Super-8 effort "It's Impossible to Learn to Plow by Reading Books" not set during his signature 24-hour time frame, offering instead a ravishing bankrobber period piece buoyed by a gentleness of spirit rare among movies of any genre. Its true story tells of the four Texas-born Newton brothers, who between 1919 and 1924 were the most successful robbers in the U.S.; led by the newly-paroled Willis Newton (Matthew McConaughey, in arguably his strongest performance to date), the gang -- siblings Jess (Ethan Hawke), Joe (Skeet Ulrich) and Dock (Vincent D'Onofrio), as well as nitroglycerin expert Brentwood Glasscock (Dwight Yoakam) -- embarks on a crime spree which spreads across the U.S. and into Canada, heisting bank vaults only at night in order not to hurt or kill anyone. (As Willis figures it, the bankers -- all covered by insurance -- are merely thieves themselves anyway.) A sweetly contemplative film, The Newton Boys is almost an anti-crime caper -- no one gets killed, and the violence which does occasionally erupt is handled with a light comic touch. By no means a master storyteller, Linklater has instead crafted a movie tailored to his own strengths, among them his skillful direction of actors, his flair for period detail and his unerring sense of rhythm; like all of his work, The Newton Boys is also informed by its maker's deep and abiding love for the film medium itself, complete with any number of striking visual and emotional references to classics ranging from Greed to Jules et Jim. While viewers expecting slam-bang action typical of the genre will undoubtedly be disappointed, those seeking a more humane and poetic alternative will be utterly charmed. ~ Jason Ankeny, Rovi

Richard A. Jones
as Engineer

Ross Sears
as Judge
View All

News & Interviews for The Newton Boys

View All The Newton Boys News

Critic Reviews for The Newton Boys

As portrayed by Matthew McConaughey in his first fully satisfying screen performance, Willis Newton regards his three younger brothers and their associates as social rectifiers who take money only from the real thieves: bankers and their directors.

A handsome production that nicely evokes the 1920s and a likeable cast headed by McConaughey can't compensate for a Western-gangster film that's too diffuse and lacks a discernibel POV to be dramatically engaging.

We're hanging out with them more than we're being told a story. There are a lot of conversations about the profession of bank robbery -- which, as a topic for conversation, is not a whole lot more interesting than double-entry bookkeeping.

Like the Newtons themselves, the film never goes for the kill.

Linklater seems to understand the root of McConaughey's appeal stems from his wild side. Casting McConaughey as someone noble and high-minded... is like hiring Madonna to play a housewife.

There's little nuance in the straightforward, chronological way the tale is told--it's hard to point to a scene that's worth discussing after you've left the theatre.

Linklater's genuine regard for his characters and fidelity to his setting are his strongest directorial traits.

These are fetching performers, but their built-in energy is about all The Newton Boys has going for it.

Had this come out three months ago, it would be up for an Oscar for something.

Audience Reviews for The Newton Boys

Early in his career, director Richard Linklater crafted this true story about brothers who rob banks and trains back in the 1920's. For Richard Linklater, who is best known for his slow character dramas, this felt like one of his weaker efforts to say the least. Starring Matthew McConaughey, Ethan Hawke, and Vincent D'Onofrio as the most notable leads, this film follows these brothers from town to town as they try to stay hidden while increasing their loot. With love, lust, and bad decisions, this film has many elements that would make for a great film. Is this a great film? Sadly no, but it does have promise, and that is what I am going to talk about here. "The Newton Boys" helms a very lengthy script, not that it is too long, but the slow pace makes the film feel much longer than it's two hour run time. That being said, films can still be great when that happens, they just have to have exciting sequences and relatable characters to back it up. For the most part, it does have that, due to it's likeable cast and intriguing story. These men never kill and that is what humanizes this story. I loved watching portions of this film, mainly due to the banter written by Linklater, but in the end, it is a very forgettable picture that seems too caught up in it's characters, rather than the way it affects the towns they harm. In the end, I enjoyed watching this film for what it was, but I think a property like this could have been better in different hands.

Cast: Matthew McConaughey, Skeet Ulrich, Ethan Hawke, Gail Cronauer, Vincent D'Onofrio, Jena Karam, Julianna Margulies, Casey McAuliffe, Dwight Yoakam Director: Richard Linklater Summary: Four Texan brothers (Vincent D'Onofrio, Ethan Hawke, Matthew McConaughey and Skeet Ulrich) ignite a crime spree in the 1920s, robbing more than 200 banks across the nation -- without ever killing anyone. In a career highlight, the unexpectedly compassionate team pulls off the largest train robbery in U.S. history. Richard Linklater (School of Rock) directs this heist film, based on a true story, that focuses more on characters. My Thoughts: "I hadn't planned on seeing this film, but the cast of the film changed my mind. Great cast of talented actors. They were really good together in this movie. Also it being based on a true story helped reel me in as well. I really enjoyed the movie. I was surprised by the lack of action, considering the film is based on bank robbing. But then again I enjoyed that they focused more on the character's. Gave you a chance to know them and to care for the character's. Might not be to everyone's liking, but it wasn't a waste of my time and I am glad I watched it."

I was pleasantly surprised at how good this movie turned out. To be honest, I'd never heard of it until a friend recommended it (based on a very old trailer on IMDb). It came out during 1998, which saw both "Mask of Zorro" and "Armageddon", so maybe that's one reason for me never hearing about it. I think it was right before Matthew McConnaughey broke onto the scene. Either way, I just plain enjoyed watching it...They show interviews from a couple of the real Newton Boys as the credits roll, which are pretty good. In particular, the interview on Johnny Carson is pretty funny. This makes me even more excited for "Public Enemies", another bank-robbery movie...They even have a minor character in here who supposedly goes on to work with John Dillinger, the guy that movie will be focused on.

A good period movie with a really good cast but the movie starts to drag after a while.