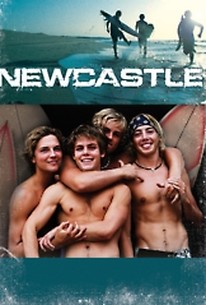 Sibling rivalry stands in the way of a young man's dreams in this coming of age drama from Australia. Jesse (Lachlan Buchanan) is seventeen years old and he's not interested in much besides surfing. Jesse's constant desire to hit the beach is fueled in part by an unhappy home life; his older half-brother Victor (Reshad Strik) used to be a local surfing champ until an injury forced him to put away his board, and now he's spends his days wallowing in cynicism and alcohol, while Jesse's younger brother Fergus (Xavier Samuel) is a punk rocker who has recently embraced his homosexuality, something Jesse hasn't become comfortable with. Jesse dreams of joining the local surfing team, and when a group of his friends and fellow surfers make plans for an all-night party on the beach, Jesse is determined to attend, even if it means lying to his parents. After a day on the surf, Jesse and his pals kick back with plenty of booze and marijuana while urging some local beach bunnies to join them for the evening, but things take an uncomfortable turn when Victor shows up and senses that his younger brother is poised to take his place as one of the stars of the local surfing scene. Newcastle was the first feature film from writer and director Dan Castle. ~ Mark Deming, Rovi

A glum and slack family drama, Newcastle is punctuated by bright bursts of dreamy surfing images, but not enough to make the film rewarding.

A beautiful film, charged with energy and sensitivity.

The story is slight but the performances are strong...

Overall, [Castle] has captured what I remember of the fantasy of the classic Newcastle adolescence -- all day at the beach, string bikinis and juicy blond teenagers.

The drama is a very low-slung affair, with the interconnections between characters poised to supply us with the only reasons to watch, other than the bodies, the landscape and the water.

Teen surfing drama is a wipe-out.

a bit like Endless Summer meets The Karate Kid

It is deflating to realise that even when doing what they love best, these characters are less than real.

For all [Newcastle's] faults, there's something honest about these characters that I responded to.

Margaret Pomeranz
At the Movies (Australia)
View All Critic Reviews (18)

There are no featured audience reviews yet. Click the link below to see what others say about Newcastle!