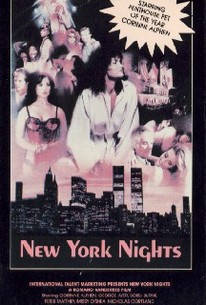 New York Nights is a boring, poorly acted adaptation of the much more successful La Ronde by Max Ophül -- ironically barred for four years by the New York State censorship board when it was first released in 1950. The story sequence is the key to the film; nine episodes each have a character from the preceding episode in a new romantic liaison, until the last character ends up with the one at the beginning. These nine scenarios are somewhere below the suds of soap-opera and above the explicit sex of porn movies. Many different directors in different countries have tried their own versions of La Ronde (based on a play by Arthur Schnitzler with much more success than this version by Simon Nuchtern.

Nicholas Cortland
as Harris, the Husband

Marcia McBroom
as Nicki, the Prostitute

William Dysart
as Owen, the Financier

Corinne Wahl
as Brooke the Debutante

There are no critic reviews yet for New York Nights. Keep checking Rotten Tomatoes for updates!

There are no featured reviews for New York Nights at this time.