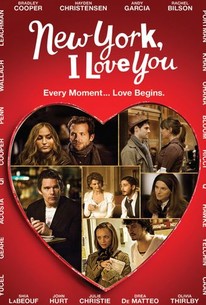 Critics Consensus: Like many anthologies, New York, I Love You has problems of consistency, but it isn't without its moments.

Critics Consensus: Like many anthologies, New York, I Love You has problems of consistency, but it isn't without its moments.

Critic Consensus: Like many anthologies, New York, I Love You has problems of consistency, but it isn't without its moments.

New York, I Love You Photos

News & Interviews for New York, I Love You

Friday Harvest: Toy Story 3, Dr. Parnassus, and more!
Critics Consensus: Where the Wild Things Are Is A Wild Rumpus

View All New York, I Love You News

Critic Reviews for New York, I Love You

If you've got a heart of treacle, an attention span of 15 minutes and can't afford the air fare then there are worse ways to spend a couple of hours.

This sequel to the superior Paris Je T'Aime is pleasant but inconsequential.

The spirit of inconsequential whimsy prevails throughout, with recurrent shots of traffic and the New York skyline helping blend different sensibilities into a multinational soup.

While many of the segments amuse, and rarely wear out their welcome (the average running time is eight minutes apiece), it rapidly becomes apparent that each of them has some kind of twist, like an O Henry short story.

Most of the shorts suffer from similarly hackneyed story lines, with all action leading up to a pat resolution.

There are plenty of surprises here; the short form seems to encourage twists.

At its best, it might be said that such a cinematic cacophony approximates the noise of Manhattan itself; but so much seems to be overlapping in this film that a feeling of distraction threatens to dispel the emotion

Cinema-goers won't find much to dig their teeth into with this disappointing collection of shorts.

How easily you'll weather the film depends on your taste for poetic, obtuse cinema, often without too much of a rhyme or reason.

The cinematography and editing is superb and makes up for any shortfalls with some of the stories, but the film's obvious draw will be its stellar ensemble cast.

Audience Reviews for New York, I Love You

Patchy. Like all movies made up of many short stories, some of it is interesting, some of it may have not bothered.

The premise seemed to make for an interesting film but there was not much cohesion to it. Some of the stories are either too short or too artsy and left me with a sense of not really "getting it".

Such a great cast, such a waste. "New York, I love You" is a series of short stories about different people in New York, and their relationships. So many stories are meshed together that you really don't care for most of the characters or their situations. I hoped this was going to be a newer "Love Actually." Instead it's a collection of "arty" short films, strung together very poorly. You would think a cast that includes, Bradley Cooper, Orlando Bloom, Shia LeBouf, Natalie Portman, Chris Cooper, Christina Ricci, Justin Bartha, Ethan Hawke, Robin Wright Penn, Cloris Leachman, Maggie Q, Andy Garcia, Blake Lively, James Caan, Hayden Christensen, and Anton Yelchin would be a GREAT movie. Unfortunately, actors don't always make the movie. "New York, I Love You" I hate the yankees, and I hate you too. Don't watch this crap, no wonder I had never heard of it til I saw it on the shelf at the library,

I am shocked at all the bad reviews I have read regarding this film. I thought that this movie was beautiful, and imaginative. This was a definite joy to watch. I think maybe you need to be in the right mood for it, and understand what it's supposed to be? I enjoyed each of the vignettes, and couldn't wait for the next one. Wonderful actors - Portman, Cooper, Christensen, Garcia, Hawke, etc.--the list goes on and on! My favorite one has to be the one with Cloris Leachman...that one was a hoot. To me, this was a real gem....

New York, I Love You Quotes