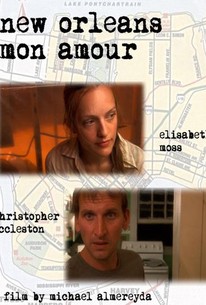 An affluent surgeon from New Orleans finds his attempt to piece his life back together after Hurricane Katrina unexpectedly unraveling with the appearance of an old flame in this drama from director Michael Almereyda. Dr. Henry Jekyll (Christopher Eccleston) is a socialite and surgeon whose once-happy home was shaken to the core by his affair with the young and beautiful Hyde (Elisabeth Moss). Now, in the aftermath of Hurricane Katrina, Dr. Jekyll has returned to town to work for an anarchist relief organization dedicated to rebuilding the city. As the tireless aid workers put all of their energy into making New Orleans livable again, Dr. Jekyll makes a concerted effort to get his own life back together by remarrying his ex-wife. But resisting temptation is easier said than done, and when Hyde walks back into his life Dr. Jekyll finds his willpower put to the ultimate test. ~ Jason Buchanan, Rovi

There are no critic reviews yet for New Orleans, Mon Amour. Keep checking Rotten Tomatoes for updates!

There are no featured reviews for New Orleans, Mon Amour at this time.