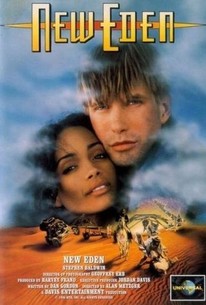 In this sci-fi drama, an engineer is stranded on a nuclear-war-ravaged planet whose inhabitants have reverted to primitive tribal societies. After being enslaved by one tribe, he escapes and is taken in by a peaceful tribe and tries to show them how to irrigate the desert so they can be self-sufficient. However, an evil group of desert pirates has plans to attack the settlement and kill or capture everyone in it.

Nicholas Worth
as Drunken Officer

Tom Conner
as Prisoner #2
View All

There are no critic reviews yet for New Eden. Keep checking Rotten Tomatoes for updates!

There are no featured reviews for New Eden at this time.