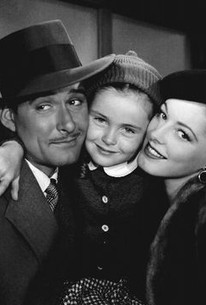 Romantic comedy was never Errol Flynn's forte, but he occasionally gave it the old college try in such films as Never Say Goodbye. Flynn plays Phil Gayley, a Petty-like magazine illustrator, whose close proximity with gorgeous female models ruins his marriage to the lovely Ellen (Eleanor Parker). When the Gayleys divorce, their precocious 7-year-old daughter Flip (Patti Brady) contrives to bring them back together. She does, of course, but not before several by-the-number comic complications, not least of which finds Phil and his romantic rival Rex DeVallon (Donald Woods) dressed in lookalike Santa Claus suits. The film's biggest laughs are garnered whenever Errol Flynn lampoons his established "swashbuckler" image, which he does with apparent relish. At one point, Flynn even imitates Humphrey Bogart-an effect accomplished by dubbing in the voice of the real Bogart! ~ Hal Erickson, Rovi

A better Christmas film than many of the more well-known ones.

Cute comedy with Errol having fun for a change and well paired with Eleanor Parker.