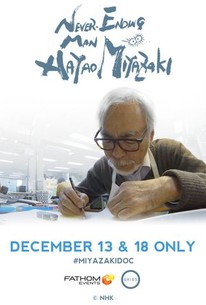 The Academy Award-winning director of Spirited Away, Princess Mononoke, and My Neighbor Totoro goes on a new adventure! Don't miss Never-Ending Man: Hayao Miyazaki in a special premiere event from Fathom Events and GKIDS. In 2013, film director and animator Hayao Miyazaki suddenly announced his retirement at the age of 72. But he couldn't shake his burning desire to create. After an encounter with young cgi animators, Miyazaki embarked on a new endeavor, his first project ever to utilize cgi. But the artist, who had been adamant about hand-drawn animation, confronted many challenges. The film even faces the danger of being cancelled. Can an old master who thinks he's past his prime shine once again? This program goes behind the scenes over two years as Miyazaki overcomes struggles to create his short film using cgi.

An affectionate look at the master's inextinguishable impulse to create that's all the more enchanting for its casual familiarity.

A limited but worthwhile look at the master animator's late career.

It's never boring but a trifle diffuse. If you're a Miyazaki fan, you'll want to see it anyway.

Starting as a dirge and ending as an ode to joy, "Never-Ending Man: Hayao Miyazaki" provides a privileged glimpse into the creative processes of one of the greatest animators who ever lived.

It's a very intimate, well-focused portrait of this great filmmaker.

The no frills doc, shot intimately if haphazardly, isn't much to look at, but it's an intriguing window into the psychology of a master filmmaker as he struggles to relinquish his craft.

Offers up a wish for something more robust and complete about the subject and his life in the not too distant future.

The real value of Never-Ending Man is the ability to spend time with Miyazaki, a man who does not take his position in Japanese animation lightly.

Barring the kitschy production value of the film's frequent intertitles, Never-Ending Man is requisite viewing for any admirer or critic of Miyazaki's career or the medium of Japanese animation.

It's fascinating to glean wisdom and insight into the legendary filmmaker's thoughtful, at times torturous, creative process.

A compelling, often engaging chronicle of Miyazaki as he finds a new vigor in his life for animation, and is prepared to leave a world that is changing too much, too quickly.

For those who, like me, adore his life's work, it's a precious and fascinating glimpse into the inner life of the world's greatest living animator.

There are no featured reviews for Never-Ending Man: Hayao Miyazaki at this time.