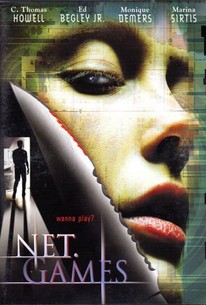 A man who has it all finds his perfect world spinning into a blinding storm of psychotic rage after engaging in a bout of extramarital cybersex in this thriller starring C. Thomas Howell. Despite having a life that every man would envy, Adam Vance (Howell) just can't help but feeling that his sex life has grown a little lackluster. When Adam discovers an illicit website known as "Cyber-chat," his steamy exchanges with the lusty "Angel" provide the sex-starved husband with just the kind of no-strings-attached sex that he had been craving. When Angel attempts to blackmail Adam, the hapless philanderer finds himself caught in a murderous web of deceit that may claim the life of not only himself, but everyone he holds dear as well.

[Howell] seems uncomfortable and somewhat embarrassed to be in the movie...

There are no featured audience reviews yet. Click the link below to see what others say about Net Games!