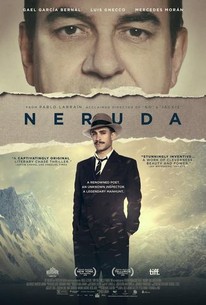 Critics Consensus: Inventive, intelligent, and beautifully filmed, Neruda transcends the traditional biopic structure to look at the meaning beyond the details of its subject's life.

Critics Consensus: Inventive, intelligent, and beautifully filmed, Neruda transcends the traditional biopic structure to look at the meaning beyond the details of its subject's life.

Critic Consensus: Inventive, intelligent, and beautifully filmed, Neruda transcends the traditional biopic structure to look at the meaning beyond the details of its subject's life.

An investigator launches a search for Pablo Neruda, a Nobel Prize-winning Chilean poet, who became a fugitive in his own country for his Communist leanings during the 1940s.

There's a comic edge to [Gael Garcia Bernal's] performance that steals the movie. In his bumbling, hapless way, he's a more sympathetic character than Neruda himself.

[An] indulgent and rather fey reverie.

The talented director Pablo Larraín, who brought us a slice of political myth with Jackie, is back on his Chilean home turf with Neruda, a wacky semi-biographical take on the radical poet and senator Pablo Neruda.

Neruda starts as political cabaret, turns into dark fairytale, ends as a kind of destiny waltz.

This is a determinedly playful, magical realist-style yarn.

There is a good idea at the center of Neruda, but director Pablo Larraín crams so much info, it gets lost in the shuffle.

Neruda is a beautiful, complex and unconventional film, deftly weaving together elements of film-noir, historical biopic and catch-me-if-you-can thriller.

In terms of style and plot, the delight of this film is not in its destination but in its journey.

Chilean director Pablo Larraín turns a standard biopic inside out in this stylish thriller with a literary bent.

Beautifully shot, ranging from the interior of brothels, to the streets of Santiago and the snowy heights of the Andes, Neruda is a satirical take on the legend of a great man, warts, fantasies and all.

It's much more interested in examining the meaning self, how system of belief shape our existence regardless whether or not we conform. I'll take that over a generic biopic anyday.

According to Picasso, as depicted in this film, the poet Neruda was the most important communist of his day. One who gave a voice to the victims of fascist oppression in Chile, and in the world. The biopic doesn't reject that idea, but dilutes it. Minimising its portrayal of the deprivations that Neruda challenged under threat of his own freedom, it paints him philosophically. It sets up a kind of Marxist "dialectic", in which Neruda and his fascist persecutor are the creators of each other, even brothers in a metaphysical sense. It concentrates on Neruda's bourgeois inclinations, quotes often a romantic passage, has him making poetic statements as he goes, and dots the screenplay with his expeditions out of hiding to visit brothels; sometimes he's disguised as a priest. The film cuts regularly to debauchery. By contrast, his persecutor is a lower class, illegitimate upstart who has no life, whose intellect is obsessed with this love/hate bond, and who chases Neruda across impossible distances in a kind of via crucis. To Neruda's devilish character, he becomes a Christ figure. Supporting characters engage in oblique arguments about the politics and what Neruda symbolises. As long as there was Neruda, the fascism would not die, and vice versa. But with all this theorising, how much do we learn about Neruda, and how much about the filmmakers' game? The show is like an honours student essay, that wants to get a top mark by playing subversively and idiosyncratically with the main point - not only the Marxist one, but presumably Neruda's as well, so that in the end it doesn't teach you much: who can say how much of this is historically accurate? The product may though deliver for anyone who thinks that Neruda's communism should be watered down, regardless.

Intelligent, humorous and inventive, Larraín's film is especially impressive due to the way it uses a cat-and-mouse game as the basis for a metalinguistic exercise instead of being a conventional biography about the poet, and it has some very fine performances by the whole cast.