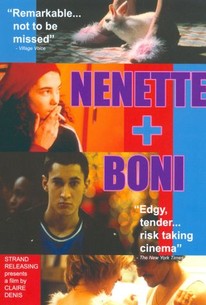 Nenette (Alice Houri) is a 14-year-old girl with an attitude problem who runs away from her boarding school only to knock on the door of her older brother Boni (Gregoire Colin). Boni has his own problems most of which center around an erotic fixation with the baker's sexy wife (Valeria Bruni-Tedeschi). He is very reluctant to take Nenette in. Then he finds out she is pregnant. As their relationship grows and adjusts, each begins to understand what maturity it takes to bring a new life into the world. Claire Denis, best known for her film Chocolat, directed. This French film won top honors at the 1996 Locarno Film Festival. ~ Clarke Fountain, Rovi

Gerard Meylan
as The Uncle

Alex Descas
as The Gynecologist

Jamila Farah
as The Wise Woman

[Claire Denis] feels affection for the characters, especially Boni, and is very familiar with them. Maybe that's why she feels free to tell the story so indirectly.

French director Claire Denis has fashioned a quietly thrilling, unexpectedly poignant film with Nenette et Boni, a simple tale of a family reunion that earns its distinction in the telling.

It's a melodramatic premise on paper that, in the wrong hands, might have succumbed to the sensationalism of its mildly incestuous undertones.

The films of French director Claire Denis often chart the flow of energy between two dissimilar people while contemplating their place within the larger community.

A sibling drama of unsentimental urban grit and swooning lyricism.

Captures the fragile and fleeting impression you often have of life, that's actually closer to life itself than the more comforting, linear perspectives of narrative film.

... elliptical told drama that has mood trump over substance.

Unusual, dreamy, and immersive. Claire Denis keeps a grip on the audience's senses while venturing into edgy subject material. The performances are naturalistic and powerful, and the music by Tindersticks underlines the overall tone of the film. A beautiful, surprising, compelling film.