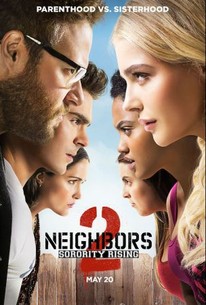 Critics Consensus: Neighbors 2: Sorority Rising may not be strictly necessary, but it still wrings a surprising amount of humor from a recycled premise with a distaff twist.

Critics Consensus: Neighbors 2: Sorority Rising may not be strictly necessary, but it still wrings a surprising amount of humor from a recycled premise with a distaff twist.

Critic Consensus: Neighbors 2: Sorority Rising may not be strictly necessary, but it still wrings a surprising amount of humor from a recycled premise with a distaff twist.

Young parents Mac (Seth Rogen and Kelly Radnor (Rose Byrne) find their troubles are far from over in this sequel co-starring Zac Efron.

Liz Cackowski
as Wendy the Realtor

Beanie Feldstein
as Nora
View All

[The film] places as much focus on a smart gender twist and sympathetic concerns about how the characters will progress.

A bit of self-awareness goes a long way in elevating this comedy sequel above the 2014 original.

There's a lot of empty improv in this Neighbors 2, scenes that have no real direction and no drive; the movie is all digression and shouted exposition.

There are about six really good laughs during the film's 92-minute running length.

The film's hurry to rush through its plethora of characters becomes a strength, because we don't have enough time to get bored by any one scene. The set pieces may be thin, but they show flickers of genuine warmth.

This sequel turns out to be a gross-out comedy with a pro-woman streak (instead of sexy selfies or bro-luring bacchanals, the sorority throws a "feminist icon" party). And it just about works.

It's not as funny as the first film, but if you like the characters, you'll probably like this one.

The movie has its flaws, but cast cohesion goes a long way.

There's nothing new in this sequel, but it sure is entertaining. [Full Review in Spanish]

Feels more like reheated leftovers than a film that expands on the success of the original.

What Rogen et al. are pointing out is that sometimes, in order to retain some modicum of power, women have to compromise in ways men don't.

It's not that it isn't funny or entertaining but I think what made the original truly enjoyable was the fresh premise. Neighbours 2 feels too much like a reiteration despite Efron's character subplot and heavy feminist overtones. It's a solid comedy but exists more or less as a really long DVD extra of the original. I think having a more profound character story revolving around Moretz instead would've been a wiser choice.

Not being an Efron or Rogen fan, I thought the original "Neighbors" was surprisingly tame, so I was more satisfied with "Sorority Rising"'s harder candy shell games coupled with its gooey-er heart center. Pete and Darren's engagement poker game serenade is just the darlingest thing ever, and the escrow lesson is actually quite enlightening. The Kappa Nu sisters are a dope-smoking, Take Back the Night (For Partying!) brand of millennial feminist, and they mean business when they challenge their university's ruling that sororities essentially have to be prim and proper ladies. There are of course some dumb moments, like all the girls being distracted by Teddy's Magic Mike striptease, which was not nearly choreographed or cinematographed hotly enough, and the "everyone be yourself" message at the end is easy in an #AllLivesMatter kind of way, ergo easier said than done, but on the whole, this sequel is a daring romp through neo-college crackademics.

The first Neighbors was a pleasant surprise, a gross-out comedy with heart, cross-generational appeal, and a surprising degree of sincere attention to round out its cast and supporting characters. For my money it was a comedy that checked all the boxes. Now two years later comes a sequel that looks to repeat just about all the plot mechanics of the first except with a sorority replacing the fraternity. It looks like it's checking the standard more-of-the-same sequel boxes. I was again pleasantly surprised, especially how little Neighbors 2 repeated the comic setups and jokes of the original (the malignant comedy disease known as Austin Powers Sequel Syndrome) and how much I still enjoyed these characters. Seth Rogen and Rose Byrne are now expecting their second child and trying to sell their house. They have to pass a 30-day escrow period without their buyers rescinding their purchase. That's when Chloe Grace Moritz transforms the next door home into an off-campus sorority. She's appalled at the gross and derogatory nature of fraternity-hosted parties and an unfairly arbitrary rule that sororities can't host parties. She and a couple one-note stock fiends throw a female-friendly party house (Feminist Icon parties and bawling your eyes out to The Fault in Our Stars) where they won't cotton to uncheck male ego. I was laughing throughout the movie with some big laughs at key points. Rogen and Byrne maintain a wonderful comic dynamic and the warring generations premise can still produce plenty of entertaining set pieces. The jokes can be sly and come at you from different angles, taking you be surprise (a "bun in the oven" joke had me almost spit out my drink). There are some things that don't quite work, mostly how listless and self-involved the female coeds come across and some of their hollow arguments in the name of feminism. I guess equality does mean that women can behave as badly as men. Neighbors 2 replaces a bit of the heart of the first film with an excess of slapstick. There's also a weird corporate synergistic tie-in with Minions that never quite settles. Still, Neighbors 2 is a satisfying sequel that reminds you what you enjoyed about the first film while not being indebted to what made it succeed. Nate's Grade: B