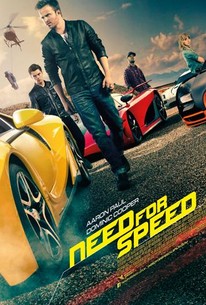 Critics Consensus: With stock characters and a preposterous plot, this noisily diverting video game adaptation fulfills a Need for Speed and little else.

Critics Consensus: With stock characters and a preposterous plot, this noisily diverting video game adaptation fulfills a Need for Speed and little else.

Critic Consensus: With stock characters and a preposterous plot, this noisily diverting video game adaptation fulfills a Need for Speed and little else.

Based on the most successful racing video game franchise ever with over 140 million copies sold, DreamWorks Pictures' "Need for Speed" captures the thrills of the game in a real-world setting. An exciting return to the great car-culture films of the 1960s and '70s, when authenticity brought a new level of intensity to the action, "Need for Speed" taps into what makes the American myth of the open road so enticing. The story chronicles a near-impossible cross-country race against time-one that begins as a mission for revenge, but proves to be one of redemption. In a last attempt to save his struggling garage, blue-collar mechanic Tobey Marshall (Aaron Paul)-who with his team skillfully builds and races muscle cars on the side-reluctantly partners with wealthy, arrogant ex-NASCAR driver Dino Brewster (Dominic Cooper). Just as a major sale to car broker Julia Bonet (Imogen Poots) looks like it will save the business, a disastrous, unsanctioned race results in Dino framing Tobey for manslaughter.(c) Disney

Carmela Zumbado
as Jeny "B"

Tony Brakohiapa
as The Gooch

Chloe Warren
as Girl at the Bar

News & Interviews for Need For Speed

View All Need For Speed News

Critic Reviews for Need For Speed

This is cinema reduced or distilled to its purest definition, of movies that move

This movie is a complete bore.

There's nothing here you haven't seen before.

The characterisation and plotting are as crude as the car chases are slick.

You wouldn't think a movie called Need For Speed would feel so slow.

It's like watching someone ELSE play a video game for more than two hours. That gets old real fast.

Let the checkered flag wave for Need For Speed as it crosses the finish line first with fast cars, phenomenal practical stunts, superb lensing, a story with heart and a future superstar in Aaron Paul.

Presumably set in a world where humans never mentally evolved from an animal state, the movie features increasingly nonsensical behaviors by derpy morons whose ability to dress themselves is as impressive to us as their ability to defy physics with cars.

It did stir up dormant gearhead fantasies with an array of epic shots. When the cars soar, so does Need for Speed.

Credited as a film that glorifies the notion of honor, friendship, and loyalty, all whilst revisiting the vintage stylings of 60's and 70's "car-culture" cinema, it's safe to say that Need For Speed fails on all counts.

Need for Speed takes itself a little too seriously and ultimately overstays its welcome.

Neither fast nor furious, Need For Speed isn't a car crash. It's a $66 million pile-up, with no survivors.

Audience Reviews for Need For Speed

I had some very low expectations for this movie. Actually, when I had blu ray sitting on my tv stand, I debated on just skipping it all together. A "Fast and Furious" knock off starring Aaron Paul(aka Jesse Pinkman) doesn't really scream out awesome movie. But, I'm a big Paul fan so decided to pop it in. I'm so glad I did! This is exactly what it sounds like, a big dumb, fun action movie, and it's entertaining as hell! This movie is a real blast of just mindless entertainment. The story is generic(Paul has to enter a race to avenge his friends death), but the performances are good and the action is fantastic. This has some of the best race/car chase scenes I've seen in movies in a long time. Aaron Paul has some great qualities that should set him up for a good film career. Dominic Cooper is the villain, and he is great. He plays a good slimy butt hole very well. This may not be as good as some of the "Fast and Furious" movies, but it's just as fun and entertaining. Check it out for a good popcorn movie.

Need for Speed seems to have all the ingredients to be the start of a cool film franchise - great leading man, cool supporting cast, beautiful cars, and the budget to make it all happen. But it's like this movie went out of its way to be disappointingly stupid. Things like one character always showing up in different helicopters kept having me think - how are you plausibly doing this? Or how Aaron Paul is established to be the best driver ever and the car he drives the fastest car ever, yet even a truck can catch up to him. Not to mention Michael Keaton's really annoying commentary throughout the final race, and the insanely awkward dialogue throughout the entire film. It seems movies made from video games are a lost cause. Need for Speed does not make the case that this trend will change any time soon.

Perfect for car enthusiasts Great Movie! This film is called "Need for Speed" and is based on a video game. This alone tells us not to expect character development, genius plot twists and memorable dialogues. This films delivers exactly what it set out to deliver. If you like fast and beautiful cars, this is for you. If you like crazy stunts and cars chases, this is for you. If you enjoyed getting chased by the cops in the video game, this is for you. Need for Speed is a film that can best be described by its resident veteran franchise patriarch Michael Keaton, a film that was "born to ride". Framed by an ex-partner for a murder he did not commit, Tobey Marshall, a financially struggling custom-car builder and street-racer, spends two years in jail thinking about one moment. Fresh out of prison he reacquires the fastest car his workshop ever built and sold, and seeks to enter a secretive and extremely high-stakes race known as The DeLeon. His purpose; redemption, recognition from the world of racing and to solve his problems. Yet all this fades in comparison to his driving reason. Revenge. Above all, revenge. This is a story about love, redemption, revenge and motor oil all swirled together, but above all; It's a story about fast, fast cars.