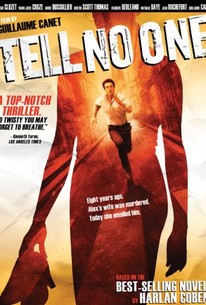 Critics Consensus: An intense, well-crafted thriller, Tell No One is equal parts heart-pounding and heart-wrenching.

Critics Consensus: An intense, well-crafted thriller, Tell No One is equal parts heart-pounding and heart-wrenching.

Critic Consensus: An intense, well-crafted thriller, Tell No One is equal parts heart-pounding and heart-wrenching.

An innocent man is on the run after he's accused of murder and his spouse seemingly returns from the grave in this thriller from France. Alex Beck (François Cluzet) is a doctor who has slowly been putting his life back together after his wife Margot was murdered by a serial killer. Eight years on, Alex is doing well enough until he finds himself implicated in the murder of two people, with plenty of evidence pointing to him as the killer even though he knows nothing of the crimes. The same day, Alex receives an e-mail that appears to be from Margot (Marie-Josée Croze), which includes a link to a video clip that seems to be recent and features his late wife looking alive and well. Margot's message warns Alex that they are both being watched, and he struggles to stay one step ahead of the law as a gang of strong-arm men intimidate Alex's friends into telling whatever they might know about him. Alex's sister Anne (Marina Hands) persuades her well-to-do lover Helene (Kristin Scott Thomas) to hire a well respected attorney, Elisabeth Feldman (Nathalie Baye), to handle Alex's case. While Elisabeth tries to keep Alex out of jail, she learns that her client has a warrant out for his arrest, and Alex goes on the lam while he and his lawyer struggle to find out the truth about the murder as well as Margot's reappearance. Tell No One (aka Ne Le Dis a Personne) was based on the international best-selling novel by Harlan Coben. ~ Mark Deming, Rovi

Canet has covered his bases with enough swooping camerawork, narrative smoke-and-mirrors, and quick-sketched supporting characters for a dozen thrillers

By and large, Tell No One is more interested in telling a knotty story than pondering its meaning, but in those rare deeper moments, Canet evokes how a tragedy can gather around a man and linger there, like a cloud of gnats.

Canet has a good feeling for lowlife atmosphere and he works up a few fine Hitchcockian twirls.

Although it might make your head spin, this case of Vertigo in cyberspace keeps us spellbound.

Tell No One is a thoroughly absorbing whodunit with more twists and switchbacks than the Le Mans racecourse.

A whodunit so nicely crafted that you're tempted to forgive the Byzantine plot -- hell, you're even tempted to pretend you actually understand its twisting obscurities.

A taut, well crafted nail-biter that manages to rise above its genre, and give the audience just a little bit more.

Tell No One doesn't waste any time setting up the central plot.

Combine the tricky twists and turns of the American thriller with the subtlety and sophistication of French cinema and you have Tell No One... a highly charged piece of work that grabs you by the neck and doesn't let go.

Suspend belief and forgive the absurdities and these are two of the most enthralling hours you'll spend in the cinema this year.

It's a thriller. It's a love story. It's for adults. Don't miss Tell No One.

Excellent movie. Good, and believable acting. Fast paced, satisfyingly intricate plot with lots of suspense. This was not one of those films where you can foresee how things are going to work out--and are usually disappointingly right-- after the first few minutes. Far superior to the other foreign films I have seen in this genre. Very well done!

A good little French thriller based on a novel by Harlan Coben. A doctor whose wife was brutally murdered eight years before receives an e-mail purporting to have been sent by the dead woman herself. Meanwhile, the police have reopened the case in the light of fresh evidence, all of which - unfortunately for him - points to the husband as the killer. Although the plot eventually twists and turns itself beyond the bounds of plausibility, Tell No One remains an intellectually stimulating and - thanks to the strong central performance of François Cluzet - an emotionally satisfying piece of work. Beware, a Hollywood remake is in the offing :S

Sometimes, Ne le Dis à Personne should have chosen to go for the drama instead of so much thriller, or the opposite. But it had to chose and it remained uneven between both. Both sides still worked and made of it all a great movie that deserved all the recognition,

After skinny-dipping with his wife, a man wakes to find himself beaten and her dead. Eight years later he receives anonymous footage of her looking directly at the camera in a train station. As mounting evidence lead the police to pursue him for the murder, he must fight to find the truth about her death - if she is even dead - in this superbly constructed thriller. As I watch many American thrillers, I notice that most writers and directors emphasize either the action sequences or the intrigue. And virtually every night we're inundated with police procedurals like CSI and Cold Case. Tell No One succeeds because it is able to combine the best of both worlds. The primary action sequence - a chase scene - actually succeeds in compelling our interest because we care about the outcome. In Salt, for example, we don't really care about the initial chase sequence because we know that she's going to get away; she has to otherwise the film won't continue. But that's not the case here. Thus, there is built-in suspense as we wonder about the outcome. Additionally, in most thrillers when we meet the "bad" guy, the mystery is over. But here, information is given so sparingly and efficiently that the final reveal actually has some effect. Tell No One succeeds in keeping the characters ahead of us without leaving us in the dark. Essentially, we actually get to watch smart people solve the mystery. Overall, Tell No One is a thoroughly engrossing thriller that is almost perfectly constructed.