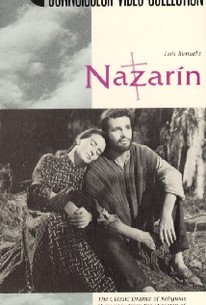 One of cinema's true innovators, Luis Buñuel takes a Spanish novel about a Don Quixote-like priest who is ridiculed for following the path of Christ, and brilliantly transposes it to turn-of-the-century Mexico. When he is defrocked for championing a prostitute and an outcast, Don Nazario takes to the road with the two women, living out his ideals until they are smashed by an uncaring world. "A masterpiece that reveals the human condition and shows us a way to surpass it. Buñuel's film unfolds under the double arch of beauty and rebellion.

Ignacio López Tarso
as The Sacrilegist

Pilar Pellicer
as Lucía
View All

It is so grim that it lacks even the energy to present itself dramatically.

It lacks his brilliant wit and seems much less adventurous than his 60s masterpieces.

Bunuel's surrealism is really a kind of mysticism in reverse, He has had to wrestle, not with the devil, but with the angel in him, and in Nazarin traces of the struggle are still apparent.

The film is beautiful, with all Builuel's peculiar sensuality in the face of things, which he can make, like faces, extraordinary and eloquent, ceaselessly expregsive and pregnant with this or that.

A film of inner and outer wounds

A very straightforward film for Buñuel.

Perhaps the most accomplished and difficult of Luis Buñuel's Mexican films.

This is another fine example of Buñuel's powerful films made during his exile in Mexico.

The most breathtaking cinematic cross-examination of faith I have ever seen… not content to ignore religion as a non-issue, or to take cheap shots at its practitioners.

While the film itself remains a subtle attack on religious naivete, the director would never be as mindful of the possibilities of spiritual healing as he is here.

one of buñuel's greatest mexican films, or let's just say greatest films. far more compassion than i was expecting from the great cynic in a religious setting and a great performance by paco rabal. open to many interpretations

Dig up your hole Virgin Mary, Mother Teresa is waiting for you and her beloved prince-charming is standing aside!!!
Act 5 over, Scene 5 over, don't you worry Nazarin, your time hasn't come just yet...

Only Buñuel's boundless brilliance and cynicism could achieve this mischievous, thought-provoking drama. A sad testament of what happens inside nearly all religious groups, only very few practice what they preach.