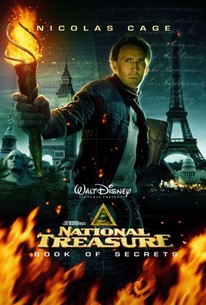 Critics Consensus: A talented cast goes to waste in the improbable National Treasure: Book of Secrets, which is eerily similar to the first film.

Critics Consensus: A talented cast goes to waste in the improbable National Treasure: Book of Secrets, which is eerily similar to the first film.

Critic Consensus: A talented cast goes to waste in the improbable National Treasure: Book of Secrets, which is eerily similar to the first film.

In this adventure-filled sequel to the 2004 blockbuster National Treasure, Nicolas Cage reprises his role as artifact hunter and archaeologist extraordinaire Ben Franklin Gates. In this outing, Gates learns of his own family's implication in the assassination of Abraham Lincoln by John Wilkes Booth. Gates must then locate an elusive diary, not only to clear his family's name, but to unearth and connect several secrets, buried within the book, that point to a massive, global conspiracy. The film co-stars Jon Voight, Harvey Keitel, and Helen Mirren as Ben's mother. Jerry Bruckheimer returns as producer. ~ Nathan Southern, Rovi

Bruce Greenwood
as The President

Stephen Hibbert
as Tourist On Toilet

This just might be the silliest movie ever to feature three Academy Award winners.

Leave it to coproducer Jerry Bruckheimer to revive the Indiana Jones cycle without the period setting, the camp elements, or Spielberg's efficiency; director Jon Turteltaub just plods along.

This sequel is what you would expect: If you liked the original, you'll probably enjoy this retread. But be warned: It bogs down in a drawn-out scene near the end.

As much as you want to applaud the movie's winking commitment to its own Looney Tunes logic, it's frustrating when lazy and illogical plot devices are used like cattle prods.

The movie's convoluted hide-and-seek plot also demands a White House break-in that makes about as much sense as subprime mortgage rates.

This American history-themed action thriller doesn't get many points for realism, but it makes up ground in so many other areas that you probably won't care.

"Book of Secrets" isn't going to be remembered as an all-time great film, but it serves its purpose by entertaining its intended audience. What more can you ask of a film?

This film appears to have been designed by cocaine addicts. [Full review in Spanish]

Even when its credibility is stretched thin, it coasts through on charm...which gives it just enough points to make it not a waste of time.

The plot is illogical to the core, which one would have accepted had the film been a sheer roller-coaster ride, leaving you little time to notice the holes in the plot.

National Treasure: Book of Secrets is a pretty typical blockbuster sequel, focused intently on appeasing what it thinks the audience wants, and missing out on what it takes to make a truly good movie.

I'll be honest I can't remember the first very much but I did quite like this. The cast is very good for just a silly film, Jon Voight, Ed Harris, Harvey Keitel and Cage...impressive. The film is really a kind of filler for the absence of 'Indy 4' or any Indy films really, and lets be honest its nowhere near as good but it is fun. The story is silly as hell again, all revolving around the history of the US and its founding fathers. The cast do make it seem greater than it is for sure, the film is also allot funnier than the first I think, its quite humorous throughout and this actually adds and doesn't detract from the film. All the action set pieces are not really any different from any other movie and the final sequence inside some caves near Mount Rushmore seems to be ripped straight out of 'The Goonies', but the whole boys mystery and adventure setup is always good fun and light hearted, harking back to older cinema romps in black and white. These type of films do have a nice pleasant charm to them, no excessive violence or swearing just good old fashioned treasure hunting, just one thing, what on earth is happening to Nic Cages hair?

I hate that this film is the exact same film as the first, but it's still fun. A bit sillier at times and slightly more unbelievable, but still a fun ride. Although I have no desire to buy this DVD ever, anytime the movie comes on TV, I normally watch it simply because it's entertaining.

Nicholas Cage + Jerry Bruckheimer = Peanut butter and jelly. But would you want to eat that as a staple of your diet? Me Neither. However, there comes a time when such a sandwich would hit the spot. I'm drunk and I'm watching National Treasure 2. It's silly, crazy bullshit, but dammit, I'm having fun. I bet children would love this movie and if ever I have any, I will be sure to pass this along.

A fun ride with lots of the same fun from the first movie. While lots of what happens in these movies stretches the imagination the cast does a very good job of pulling it all together.