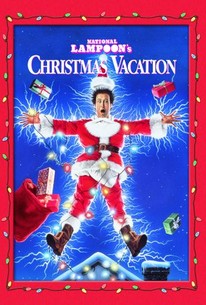 Critics Consensus: While Christmas Vacation may not be the most disciplined comedy, it's got enough laughs and good cheer to make for a solid seasonal treat.

Critics Consensus: While Christmas Vacation may not be the most disciplined comedy, it's got enough laughs and good cheer to make for a solid seasonal treat.

Critic Consensus: While Christmas Vacation may not be the most disciplined comedy, it's got enough laughs and good cheer to make for a solid seasonal treat.

This is the third in the "National Lampoon" series about the Griswold family. In this sequel, the Griswolds must deal with a holiday with their in-laws.

Jeremy Roberts
as Cop
View All

In National Lampoon's Christmas Vacation, Chevy Chase's family Christmas tree is a little full with a lot of sap, much like this movie. But it's a big-hearted fullness and it's a smoothly stirred sap.

The new film does little more than reintroduce these familiar characters (with new actors playing the children, who would otherwise be college age by now) and let them get on one another's nerves in earnest.

As always the visual gags are more prevalent then the verbal ones, and are lit up in neon so you can't miss them.

One of the great unanswered questions in Hollywood is how Chevy Chase still gets work.

Christmas Vacation may not be a fancy package, but it is a diverting stocking stuffer.

National Lampoon's Christmas Vacation is a non-stop laugh riot, with extremely memorable moments, beautiful cinematography, and a heartwarming story at its core.

National Lampoon's Christmas Vacation isn't the finest Xmas movie you'll ever see, but it's disarmingly heartfelt at times, and the over-the-top extravaganzas (like the house lights you could probably see from space) epitomize Christmas.

[A] fairly perfect blend... of cartoon violence and mayhem and the pleasant lightness of a Christmas movie.

John Hughes wrote the screenplay for this silly, warm little guilty pleasure that nails most of the trials and tribulations of spending the holidays with family.

Easily the funniest of the four Vacation movies. Just try keeping a straight face when the uncouth Cousin Eddie (Randy Quaid) is on screen.

First California, then Europe, now entry #3, the Griswold family set their sights on Christmas...and the result is a real holiday classic. Rather than hit the road this time, Clark and Co. stay home and play host to family as part of Clark's vision to have a perfect, fun, old-fashioned celebration of the birth of Jesus. Oh, but don't worry, this isn't a religious movie; It does come around and have a nice message to it though. Yeah, the movie is very over-the-top, formulaic, cheesy, predictable, and pandering, but it's still a blast, with too many great quotes to rehash, and some truly memorable screwball set pieces. As far as the cast go, we get the return of Chevy and Beverly, as well as reappearances from Randy Quaid as Cousin Eddie and Brian Doyle Murray, who, in the first played the campground clerk, but shows up here as Clark's Scrooge-esque boss. Then there's Juliette Lewis and Johnny Galecki filling in as Rusty and Audrey, Juila Louis-Dreyfuss as a snotty yuppie neighbor, and my favorites: William Hickey and Mae Questel as Uncle Lewis and Aunt Bethany. As for Clark and Ellen's parents we get E.G. Marshall, Doris Roberts, Diane Ladd, and John Randolph. Pretty great cast if you ask me. The writing from John Hughes is quite hilarious, even if on the nose a lot of the time, and the film really ups the ante as far as bawdy content and Christmas films are concerned..well, until Bad Santa, at least. All in all, this is one of my favorite holiday films, and a deliriously fun comedic romp that everybody should see.

With a powerhouse cast and a hilariously written script by John Hughes, "National Lampoon's Christmas Vacation" is the type of holiday film that never fails to make me laugh my ass off. The plot is simple, following a family through the holidays, where every piece of slapstick in the book occurs. The family is loveable and there are many touching moments throughout this film, even though it may seem like the comedy always takes over. This is one of my favourite films that revolve around Christmas. Chevy Chase is fantastic as always, and just makes the Griswold character funnier than he would have been on paper. The gags are fresh, the cast is awesome, and the direction is very well done, for a comedy that is. I love "Christmas Vacation"!

This is the weakest of the three but its still a very good Xmas comedy, probably the best ever really which still tells you allot. It hits all the right cozy Christmas notes and cliches but because its part of the Griswold series and has Chase hamming it up it still comes across as a great family comedy. It has a nice animated section at the beginning credits and continues with some great slapstick and dialog throughout, nothing too surprising but it works. The Xmas dinner, the house lights (copied by many now) the squirrel in the tree, cutting down the tree, the snobbish neighbours, 'cousin Eddie' etc...there are still some great moments here but you can see how the franchise is slowly grinding to a halt, this just keeps its head above water :)

There's no Christmas that goes by without me watching this at least once. I've seen it so many times now, yet it's still as side-splitting as ever. Not only do we all have something we can relate to in it, but it's also the perfect marriage between slapstick and the more intelligent kind of humor. It's my hands-down favourite "Vacation" movie, and also one of my top 3 beloved Christmas flicks, along with Home Alone 1 & 2. From the cat that gets burned into the rug to the white trash antics of Cousin Eddie, there's so much to love about this film that you'll keep coming back for more. A must-see for the holiday season, whether you're a Chevy Chase fan or not.