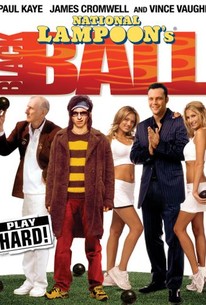 It's the weight of tradition versus youthful vigor when loudmouth Torquay lawn bowling superstar Cliff Starkey (Paul Kaye) catches wind of an upcoming championship match between England and heated rivals Australia. He's determined to make the national team in a bid to bring his sport-of-choice into the new millennium. Quickly acquiring a flashy American agent (Vince Vaughn) and becoming the most popular player in England, Cliff vows to dethrone traditionalist champion Ray Speight (James Cromwell), who has made no secret his hatred of Cliff's brash showmanship. When Cliff starts seeing Ray's daughter, the competition really begins to heat up.

A full-on local crowd-pleaser, "Blackball" takes the genteel sport of, uh, lawn bowling and comes up with a shameless slice of Brit flag-waving comedy.

It's messy, but the real problem is: it's not funny.

A hackneyed portrait of zany British eccentrics whose limited appeal will presumably sink like a stone in the English Channel ...

I can think of only two explanations for its comprehensive badness. Either the director, Mel Smith, went through the script, carefully excising all the funny lines, or Firth sub-contracted the writing chores to his accountant.

The laughs here are way off-target. This Brit-flop won't be bowling anyone over.

Tim Firth's script is functional on a sitcom level at best, and Mel Smith's direction differs from the usual hack job only in being a bit worse (especially in the frequent montages set to rock songs).

It just winds up as another filmmaking exercise where it's thought that the story is there, but in reality, it got drunk at the corner bar and puked all over the characters.

Shares very little in common with the anarchic humor of the magazine, live shows, records or movies that made the Lampoon name so venerated in the first place.

Blackball is a cinematic dirty bomb, a mediocre "comedy" that offers as many laughs as a dentist's drill.

Only occasionally does Blackball rise to the level of something that would stop you from flipping channels on TV.

...another variation on the "snobs versus slobs" formula codified by Caddyshack

a humorless bit of nonsense

Reasonably entertaining, and though I'm not sure that it's exactly how it happened it's all good fun.