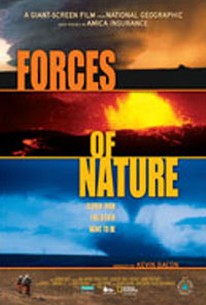 Kevin Bacon narrates this documentary (produced by the National Geographic Society) which examines the elemental power of earthquakes, tornadoes, and volcanoes. Combining striking archive footage with computer-created reenactments and interviews explaining just what causes these natural forces to lose control, the film's sequence on volcanoes is centered on the massive Soufriere Hills eruption of 1995, while an tremor in Izmit, Turkey, which cost the lives of 17,000 sets the stage for a segment on earthquakes, and Dr. Joshua Wurman leads a group of "storm chasers" as the filmmakers investigate tornadoes. Forces of Nature was shot and initially exhibited in the high-definition IMAX film format.

One of the few movies where the word 'awesome' truly applies.

Often breathtaking, Forces of Nature reminds us of the true meaning of global power.

A tad dated when it was finished earlier this year.

While the Hollywood movie cooked up its killer weather on special-effects computers, these are real.

This 50-minute tour of three of nature's great disasters will leave you shaken. Sometimes literally.

An entertaining but frustratingly brief look at the way earthquakes, tornadoes and volcanoes affect humanity.

Forces of Nature doesn't just show nature at its angriest; this film explains how and why as well. It's a highly entertaining way to learn valuable lessons.

Great images, to be sure, but there are just not enough of them, and too many static shots of researchers confabbing over instrument panels.

Captures the grandeur and terror of our Midwestern cyclonic storms.

There are no featured audience reviews yet. Click the link below to see what others say about National Geographic: Forces of Nature!