Naruto the Movie: Ninja Clash in the Land of Snow (Gekijô-ban Naruto: Daikatsugeki!) (2004) 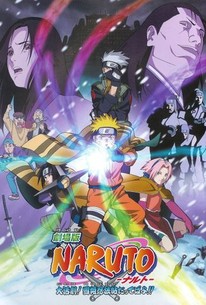 Based on the popular anime series of the same name, Naruto: The Movie follows the quest of a fledgling ninja who discovers that the actress he has been assigned to protect is in fact a princess from a magical land. Naruto has been hired to protect popular actress Yukie Fujikaze, but Yukie harbors a deep secret that could forever alter her protector's fate. Yukie is not only an actress, she's also a princess from the magical realm of Snow Country - which has recently been overtaken by a powerful evil. Now, as that evil strikes out with a vengeance, Naruto will find that overzealous fans are the least of his worries. ~ Jason Buchanan, Rovi

Critic Reviews for Naruto the Movie: Ninja Clash in the Land of Snow (Gekijô-ban Naruto: Daikatsugeki!)

There are no critic reviews yet for Naruto the Movie: Ninja Clash in the Land of Snow (Gekijô-ban Naruto: Daikatsugeki!). Keep checking Rotten Tomatoes for updates!

Audience Reviews for Naruto the Movie: Ninja Clash in the Land of Snow (Gekijô-ban Naruto: Daikatsugeki!)

I've never been big on the whole Anime craze even when Dragon Ball Z was at the height of it popularity. So my friend recommended me this movie, though it may have it flaws I found the overall movie to be a blast. Naruto Uzumaki the ninja-in-training knuckle-headed and his team are sent on a mission to guard Yukie Fujikaze, a popular actress. Now since I haven't seen the show or read the Magma, I can't tell you if the story lives up to those works. What I can tell you it has a good story, though I found myself laughing unintentionally in some serious scenes. It works, though I did find the movie to be focusing to much on Naruto and not enough on the other characters, especially the villains. I know good action when I see it, but it hard for me to actually behind animated action sequences since they don't have the same feel. That's a good thing in this case, what special effects can't do in action an animated format can. For the most the part the action is fast for most of the fights. One spectacular moment I enjoyed allot was the iced-whale attacked or whatever it was called, was definitely one of the best scene i've ever seen animated. I'll recommend Naruto The Movie: Ninja Clash In the Land of Snow for anyone not familiar with the Naruto series. Though it may be a flawed animated movie, it's still worth a watch.

Enjoyable movie. The movie has great developed story, good action scenes, and of course some good comedy as well. The animation is to be expected just like the television show with a few nice visuals along the way.