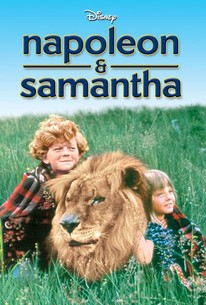 In this heartwarming family-oriented adventure from Disney, an adorable orphan named Napoleon (Johnny Whitaker) is sent to live on his grandfather's Oregon farm. There he is befriended by a college student (Michael Douglas) who has come to the spread to work as a goat herder during the summer. One day a traveling circus comes to town and before it leaves, the lion trainer gives the grandfather an aging lion named Major to care for. This makes Napoleon happy until his grandpa suddenly dies. Not wanting to be sent to an orphanage, the boy convinces the goat herder to help him bury the old man. The goat boy then returns to the wilderness while the youngster and his lion try to get by. Eventually the authorities get wind of the death and come to investigate. The boy panics, and he and the lion set off into the wilds to find the goat herder. A young girl named Samantha (Jody Foster making her feature film debut) joins them and they have many exciting adventures.

Will Geer
as Grandpa

Arch Johnson
as Chief Of Police

Critic Reviews for Napoleon and Samantha

Audience Reviews for Napoleon and Samantha

Typical Disney fodder, with a lift from the cast.