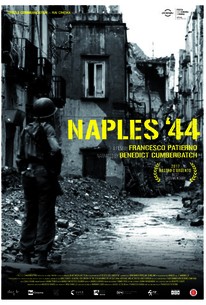 Benedict Cumberbatch gives life to the words of British soldier Norman Lewis, whose remarkable memoir of post-World War II Naples form the basis for this haunting evocation of a ravaged land, and later a city of infinite charm. Lewis entered Naples as part of an invasion of Nazi-occupied Italy. His memories of a ravaged land and his return many years later are recalled with magnificent warmth and wit. Filmmaker Francesco Patierno combines riveting archival war footage with clips from movies set in Naples from the 1950s and 60s (featuring Marcello Mastroianni, Alan Arkin, Ernest Borgnine) to evoke a city that was as much a victim of the war as any individual, but that has come back to life with all the charisma of Vesuvius, its very own volcano.

Haphazardly assembled in tone, with no clear reason to include lengthy clips from Mike Nichols' "Catch-22" or Liliana Cavani's "The Skin" (among others) aside from their story-positioned relevance to the city at the time.

The doc delivers enough arresting Neapolitan moments that many viewers will consider tracking down the source material - still in print, nearly four decades after Lewis published it in 1978.

In the end, the most important point made is that postwar occupation is hard, hard work...one you hope today's stateside politicians will someday take on board.

Colorful details ... don't change the sense that "Naples '44" is essentially an abridged version of a much more detailed work. It seems less a full-fledged movie than a trailer for a book.

At first, this mosaic technique was a little distracting. But soon it started to create a hallucinatory quality that felt entirely appropriate for a city where humanity was reduced to something approaching the elemental.

The time-traveling visuals are gracefully propelled by Benedict Cumberbatch's narration of Lewis's eloquent and precise prose, with its sotto voce observations intact.

This is a film that must be seen more than once.

It bounces from one topic to the next with the carelessness of someone flipping through a book and reading from a random page.

There are no featured reviews for Naples '44 at this time.