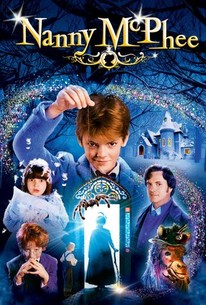 Critics Consensus: A bit alarming at first, Nanny McPhee has a hard edge to counter Mary Poppins-style sweetness, but it still charms us and teaches some valuable lessons.

Critics Consensus: A bit alarming at first, Nanny McPhee has a hard edge to counter Mary Poppins-style sweetness, but it still charms us and teaches some valuable lessons.

Critic Consensus: A bit alarming at first, Nanny McPhee has a hard edge to counter Mary Poppins-style sweetness, but it still charms us and teaches some valuable lessons.

In this dark and witty fable, Nanny McPhee (a person of an unsettling appearance and magical powers) enters the household of the recently widowed Mr. Brown and attempts to tame his seven exceedingly ill-behaved children. The children, led by the oldest boy Simon, have managed to drive away 17 previous nannies and are certain that they will have no trouble with this one. But as Nanny McPhee takes control, they begin to notice that their vile behavior now leads swiftly and magically to rather startling consequences. Her influence also extends to the family's deeper problems, including Mr. Brown's sudden and seemingly inexplicable attempts to find a new wife; an announcement by the domineering Aunt Adelaide that she intends to take one of the children away; and the sad and secret longings of their scullery maid, Evangeline. As the children's behavior begins to change, Nanny McPhee's arresting face and frame appear to change as well, creating even more questions about this mysterious stranger whom the children and their father have come to love.

Nanny McPhee falls back on the Nickelodeon principle "If all else fails, hit 'em with a retina-searing overload of visual and aural information."

The kids will love the candy-box sets and costumes like confectionery-shop windows, the whimsy and farcical grotesqueness of it all.

Any time Thompson curls that prosthetic snaggletooth over her lower lip and murmurs a nearly inaudible harrumph is a comic moment to be treasured.

There's nothing offhand or spontaneous-feeling about Nanny McPhee; it's a highly mechanical piece of work, and its potentially delightful details are wasted.

In a seemingly blithe way, the movie captures an aspect of child consciousness not usually explored onscreen -- that zone between innocence and knowledge.

Nanny McPhee is neither pretty nor perky. She doesn't sing, dance, or sweep the children off to fantasyland. Thompson has said that there is a kind of zen quality to her, and that seems about right.

As Nanny McPhee's hideousness melts slowly away, the film packs a sweet punch, but there is still a spoonful of medicine in amongst the concoctions of clotted cream and acid-coloured icing.

It's more of a kids' film than a grown-up's movie, with a good message at its heart.

The kind of movie that I would have loved to seen as a kid. Magical stuff. I look forward to the sequel. Paul Chambers, CNN.

Nanny McPhee really works ... despite all of its common plots and ideas, because it stays true to storybook conventions that have never and will never get old.

An exquisitely designed fable that will delight adults as well as their offspring through its beguiling innocence and hushed, low-key charm.

This was quite entertaining.

Nanny Mcphee is about a father that has a hard time keeping a nanny in house because his kids run the house. Then nanny Mcphee comes to see if she can help. At first the kids will do anything in their power to get rid of the new nanny. Will Mcphee leave or stay and teach them how to behave. Pros Good plot Con lacking acting I just thought Mary poppins was a better film.

"When you need me, but dont want me, then I must stay. When you want me, but dont need me, then I must go." Nanny Mcphee is the mysterious, amusing and a bit scary Nanny~! Emma Thompson wrote the screenplay for the film and also stars as Nanny McPhee,really bringing the character to life. Through the use of make up and costuming that included a nose, unibrow, warts, large earlobes and padded costumes Emma Thompson is transformed (almost unrecognizably) into the ugly mysterious, slightly lovable and slightly scary Nanny McPhee. I loved this movie it had a ton of charm and really witty dialogue~!! well worth seeing.