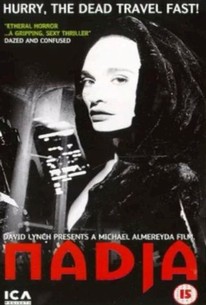 A beautiful vampire is stalking the streets of downtown New York in this combination horror film and black comedy. Nadja is the daughter of a recently deceased Romanian count (a renowned fellow from Transylvania). She refuses to continue on in his centuries old tradition of blood-sucking; Nadja wants a different life. But old habits are hard to break and in the first scene we see her lustily dining upon a fellow she'd picked up in a New York bar. Nadja's next victim is Lucy. After seducing Lucy, Nadja finds that she is in love. But Lucy is married to Jim, and Jim's uncle Dr. Van Helsing was the killer of Nadja's father. Now the good doctor wants to get Nadja and her ailing twin brother Edgar, who is being cared for by nurse Cassandra. The film follows a serpentine path of plot twists before reaching it's conclusion.

In the title role of Michael Almereyda's "Nadja," an elegant, witty but also sometimes tedious spin on the legend of Dracula, Elina Lowensohn is a black-caped beauty with a bold Frida Kahlo face.

This offbeat horror item works much better as a dreamy mood piece with striking poetic images and as a semicomic appreciation of a few quintessential low-budget actors than as straight-ahead storytelling.

A lovely idea for a film that's been beautifully executed but slips too far off its narrative tracks to get where it wants to go.

An idiosyncratic film, admired by many for its strong atmosphere, and by this writer for its absurd(ist) casting of a barely recognisable Fonda as Donovan's mad uncle Van Helsing.

It is refreshing to see so much style and life in the old undead tale, and to watch this strong cast with its perfect deadpan attitudes.

What could have been a brilliant short becomes deadly, stretched to feature length.

This idiosyncratic take on the genre is as much concerned with ordinary family dynamics as the absurdity of its characters' demonic existence.

Not without interest, but less satisfying than even an average Hammer horror.

It may not make much sense, but it never looks less than fabulous.

If Nadja is to be considered an interesting failure, there's something to be said for the value and substance of broken treasures.

Too bizarre to be taken seriously and not funny enough to be entertaining.

One of the worst vampire movies I have ever come across. Its in my Suzy Amis Collection and the only reason I continued to watch it. Dracula gets hunted down and killed by the current Van Helsing. But Dracula's Daughter Nadja takes his place in the undead world. Nadja, coincidentally gets involved in a lesbian relationship with Lucy, wife to Jim Van Helsing. Its in B&W which takes away from the overall movie, after all it was filmed in 1994.I didn't get much out of this, maybe an Art house Movie, not sure, just didn't work for me at all. 1 Star

I love this movie. Absolutely never get tired of it. The best vampire movie ever made. I love everything about it from the way it is filmed in grainy black and white, to the soundtrack, the performances, particularly Elina Lownsohn - perfect. I must have watched this about ten times now. If you like Vampire movies, then you must see this.

the most poetic vampire film I have ever seen. Beautiful, emotional, raw, engaging, and vastly under-seen and under-rated.

I really thought I wouldn't like this, but I did. A very novel take on vampire movies - I especially liked the aged hippy Van Hellsing riding around on a scooter. However, the way it is shot probably puts people off. I'm okay with black and white films but to keep flicking from colour/highlights to black and white can be rather distracting.