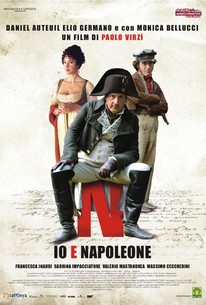 A young firebrand learns the hard way about the practical problems behind political assassination in this lavish period comedy. In 1814, with his reputation in tatters and his rule of France come to an inglorious end, Napoleon Bonaparte (Daniel Auteuil) flees to the Island of Elba, where his arrival causes no small stir among the citizens. However, not everyone is pleased with his presence; Martino (Elio Germano) is a young and idealistic schoolteacher who believes Napoleon turned his back on the ideals he fought for in the French Revolution, and doesn't hesitate to criticize the former Emperor in front of his students. When Martino isn't busy with his students, he attends to the romantic needs of the beautiful Baroness Emilia (Monica Bellucci), but she's powerless to help him when his controversial opinions about Elba's new arrival cause him to be fired. When Martino learns that Napoleon is in need of a personal secretary and librarian, he has a brainstorm -- if he can get the job, he'll be close enough to the former emperor to win his trust and then kill the despot when no one suspects. Martino is awarded the prestigious position, but once he gets to know Napoleon, the great man's charm and wit make it difficult for Martino to put his deadly plans into motion. N (Napoleon and Me) (aka N (Io E Napoleone) received its North American premiere at the 2007 Tribeca Film Festival.~ Mark Deming, All Movie Guide

Critic Reviews for Napoleon and Me (N Io e Napoleone)

Napoleon and Me is always lively and often charming.

Pleasant but ultimately slight costumer is generating good local press, though non-Italo auds will lose much of the heavily accented wordplay.

May well be the best zany Napoleonic-era romantic comedy costume drama ever.

Germano's superb performance holds the film's two different story strands together, making N an uneven but worthwhile film rather than a confusing mix of genres.

Audience Reviews for Napoleon and Me (N Io e Napoleone)

There are no featured audience reviews yet. Click the link below to see what others say about Napoleon and Me (N Io e Napoleone)!