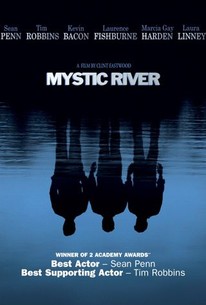 Critics Consensus: Anchored by the exceptional acting of its strong cast, Mystic River is a somber drama that unfolds in layers and conveys the tragedy of its story with visceral power.

Critics Consensus: Anchored by the exceptional acting of its strong cast, Mystic River is a somber drama that unfolds in layers and conveys the tragedy of its story with visceral power.

Critic Consensus: Anchored by the exceptional acting of its strong cast, Mystic River is a somber drama that unfolds in layers and conveys the tragedy of its story with visceral power.

Directed by Clint Eastwood, the mysterious drama Mystic River is based on the novel by Dennis Lehane and adapted by screenwriter Brian Helgeland. Set in an Irish neighborhood in Boston, Jimmy, Sean, and Dave are three childhood friends who are reunited after a brutal murder takes place. Reformed convict Jimmy Markum (Sean Penn) and his devoted wife Annabeth (Laura Linney) find out that their teenage daughter Katie (Emmy Rossum) has been beaten and killed. Jimmy's old friend Sean Devine (Kevin Bacon) is the homicide detective assigned to the case, along with partner Whitey Powers (Laurence Fishburne). Jimmy also gets his relatives, the Savage brothers (Adam Nelson and Robert Wahlberg), to conduct an investigation of their own. Jimmy and Sean both start to suspect their old pal, Dave Boyle (Tim Robbins), who lives a quiet life with his wife Celeste (Marcia Gay Harden) but harbors some disturbing secrets. Clint Eastwood won a Golden Coach for Mystic River at the 2003 Cannes Film Festival. ~ Andrea LeVasseur, Rovi

Will Lyman
as FBI Agent Birden

Susan Willis
as Mrs. Prior

Bill Thorpe
as Neighbor at Barricade

Duncan Putney
as Solicitor in Car

Eastwood and his actors create a brooding drama whose events and interrelationships seem surreally improbable yet painfully authentic.

It is a film of magisterial, slow-burning power, one of the finest examples of recent American cinematic storytelling and certainly Eastwood's most mature film.

Violence and revenge have been a staple of Eastwood's work from the beginning, but here he explores his subject from a new, more ambiguous angle, with no regard for macho titillation.

It is in many ways Eastwood's tightest movie for some time, and certainly his darkest since Unforgiven; indeed, the ending offers as corrosive an assessment of the limits of American justice as anything in his career.

Sean Penn is so frighteningly good in this movie that he outdoes even the best of his earlier work.

The unfashionably slow editing style and the concentration on close-ups and two-shots allow Eastwood to scrutinise his characters as they are forced to dig into themselves.

While Mystic River is at its basest a crime thriller, it is so much more than that.

One of its best qualities is that it's dark but not depressing.

Eastwood tells the story simply, barely moving the camera. The only special effect in this film is genius.

There is nothing romantic about the law of the streets, and its unforgiving nature has a finality that can't be undone. Eastwood has an understanding of what it takes to live with yourself, not so much a sympathy as an appreciation.

Three childhood friends who share the memory of a traumatic event are brought together once more when one of their children is murdered. Clint Eastwood once again proves he is one of the best directors working in Hollywood with this extremely well acted and written crime drama. The characters on display are far more sophisticated than those found in your average mainstream thriller, and the top notch cast all get to demonstrate their thespian chops with plenty of meaty dialogue as Clint cranks up the suspense with consummate skill. I personally have always found Penn a little unconvincing and his performance here is a little over-ripe as well, but he is a suitably intense protagonist. Kevin Bacon and Laurence Fishburne are totally believable as the detectives on the case, very much in the tradition of The Wire and Oscar winner Tim Robbins is the stand out as the traumatized abductee who is beginning to fear for his sanity. My one criticism would be that I thought that the epilogue killed the mood somewhat, but as a whole it is head and shoulders above the usual cop thriller fare.

A masterpiece. A pure powerhouse entertainment. Sean Penn is magnificent, giving a groundbreaking and emotionally shattering performance. Tim Robbins is brilliant, a haunting and brooding performance. Kevin Bacon is terrific, a compelling and fantastic performance. Laurence Fishburne is excellent. Marcia Gay Harden is a revelation. The acting is so beyond superb, the actors go places they haven't been before and nail it dead on. A powerful cast. It's sizzling, heart-pounding and utterly shocking. The best picture of 2003. Clint Eastwood's best film as a director. An instant classic. A powerful, deeply effective, chilling and brooding thriller. A stylish, masterful, intriguing and searing mystery. Unsettling and unforgettable. It sticks in your mind and does not let go. It will keep you on the edge of your seat then take your breath away and knock you out. A true shot of adrenaline to the heart. Such a film should not be missed for it's power, suspense, tragedy and emotion.