My Own Private Idaho1991 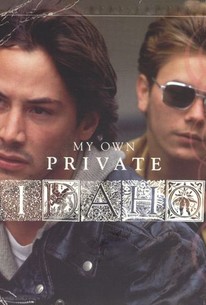 Critics Consensus: A tantalizing glimpse of a talented director and his stars all at the top of their respective games, Gus Van Sant's loose reworking of Henry IV is smart, sad and audacious.

Critics Consensus: A tantalizing glimpse of a talented director and his stars all at the top of their respective games, Gus Van Sant's loose reworking of Henry IV is smart, sad and audacious.

Critic Consensus: A tantalizing glimpse of a talented director and his stars all at the top of their respective games, Gus Van Sant's loose reworking of Henry IV is smart, sad and audacious.

My Own Private Idaho Photos

Gus Van Sant's dreamtime riff on Shakespeare's "Henry IV, Parts I and II" features River Phoenix as Mike Waters, a narcoleptic male hustler who is first seen drifting on a stretch of highway in Idaho. Mike shifts from Seattle to Portland, where he has taken up with Scott Favor (Keanu Reeves), who is also a hustler. The difference between them is Mike's sleepy state betrays an uncertain future, while Scott is ready to inherit a fortune from his father within a week. Mike feels a real affection for Scott, but Scott does not believe men can really love each other. Besides, Scott is mostly hustling as a means of slumming and killing time before he inherits his money. Mike, however, delusionally thinks Scott will continue with his life as a drifter after receiving his inheritance. Mike's belief is shared by the dregs of Portland, who live out of an abandoned hotel with their spiritual leader Bob (film director William Richert). They're convinced Scott's fortune will benefit them all, when in reality Scott has other plans.

James A. Arling
as Minister

David Reppinhagen
as Yuppie at Jake's

Tiger Warren
as Himself

News & Interviews for My Own Private Idaho

View All My Own Private Idaho News

Critic Reviews for My Own Private Idaho

Holding all these elements together is Van Sant's sensibility, such an elusive thing it instinctively squirms away from any attempt to pigeonhole it.

Although River Phoenix has distinguished himself as an actor ever since his second film, Stand By Me, nothing he has ever done before prepares you for his performance in Private Idaho as the motherless, homeless, loveless piece of human driftwood.

This is a very rich, very sympathetic piece of work.

[Van Sant] disdain[s] narrative. He got away with Drugstore Cowboy because its band of drugged-out dodoes were engaged in a petty crime spree that almost passed for a plot. But My Own Private Idaho is a different story. Or rather nonstory.

One of the most original cinematic talents at work in this country, Van Sant has a knack for pulling disparate elements together and twisting them into wildly funny lyrical odysseys of the mind and heart.

"My Own Private Idaho" is both a love story and a tragedy. It remains the high point in Gus Van Sant's career.

Cracked and beautiful, stranger than strange, yet in some assuring way so pulsing with life that it embraces you as warmly as Father Knows Best.

Van Sant proves again that he is masterful at charting the hearts and minds of young people adrift.

Audacious, controversial, directional, important and totally unique, you'll either love it or hate it. But see it!

Audience Reviews for My Own Private Idaho

Once in a while, I do enjoy Gus Van Sant, who, for me, is a lot like Steven Soderbergh: really versatile, talented, and definitely important. This movie has been on my list of films to see since I first wrote it over five years ago. Yes, I'm serious. I'm not sure why it took me so long to finally see it, but I'm glad I finally did. Allegedly this is supposed to be loosely based on the Shakespeare works Henry IV Parts I and II and Henry V, but I didn't really see that. Of course, it would probably help if I was actually familiar with those works, but still. Okay, so sometimes the dialogue does come off as somewhat Shakespearean because of the delivery, but I really don't see the whole thing of translating historical dramas into a dream-like road movie about two hustlers. We mostly follow Mike Waters, a sensitive young street hustler with narcolepsy. He works the streets of Portland and Seattle, but longs to find his mother who abandoned him at a young age. His search leads him to all kinds of places, namely Idaho (where he's originally from), but overseas as well. Joining him on his quest for "home" is Scott Favor the unrequited love interest. Scott, like Mike, is a hustler, but he's from a more well-to-do background. In fact, he's the wayward son of Portland's mayor. He says he'll eventually straighten up and do as his father wishes, but for the time being, he's happy being on the mean streets with all kinds of colorful characters. The film was a rather big deal when it came out, and I can see why. It sheds light on an interesting subculture, it's got some mostly strong direction, great visuals, it continued Van Sant's wave of success, and featured some terrific performances from River Phoenix as Mike and, yes, shockingly enough, Keanu Reeves as Scott. I don't know what happened to him that caused him to be how he is now, but yeah, back in the day, he was actually a credible and legitimately good performer. Other performers are good too, but these guys are the real highlight. Even though this is a good movie, and I can see why it has a very positive reputation, it's not perfect. It's merely good, instead of great, hasn't really aged that well, doesn't seem that fresh anymore, and has a tendency to meander a little too much a little too often. It does provide a nice and sensible look at Gen X hustlers, but even then it comes off as a tad pretentious here and there. Despite my gripes, I do like this, I'm glad I finally saw it, and think you should check it out if you enjoy the offbeat, or want to really get into the career of Van Sant.

A strong beginning that becomes a bit cryptic towards the end, My Own Private Idaho is a respectable piece of film and is pure Van Sant. The poetic dialogue in some scenes mixed in with River Phoenix's narcolepsy brings a story that develops unusual characters and a excellent adventure.

Gus Van Sant's My Own Private Idaho is less a film about the physical and more about the spiritual. Loosely based on Shakespeare, it's a beautifully-shot independent film with something to say. I can't really admit that I liked the film all that much. It takes a while to get going and there are long pauses where it seems like nothing's happening, but as an art film (which is what I consider it to be), it works very well. Both River Phoenix and Keanu Reeves give great performances amidst the backdrop of street hustling, the open road, Italy and the Idaho countryside. It's probably not a film for everybody, but the general consensus is that it's very well-received by most people, so it may be a bit broader than I would expect it to be. Although I have to say, I think a lot of that has to do with the sex appeal of its two young actors. Perhaps that's just me, but I'm sure it has something to do with it. It's a good film, but not one I'd watch over and over again.

Beautifully shot and with great performances, this uneasy story pulls you in. A surprising role by Udo Kier is an extra bonus.

My Own Private Idaho Quotes