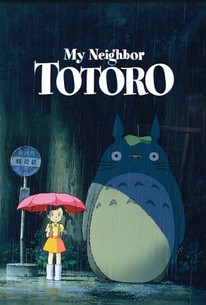 Critics Consensus: My Neighbor Totoro is a heartwarming, sentimental masterpiece that captures the simple grace of childhood.

Critics Consensus: My Neighbor Totoro is a heartwarming, sentimental masterpiece that captures the simple grace of childhood.

Critic Consensus: My Neighbor Totoro is a heartwarming, sentimental masterpiece that captures the simple grace of childhood.

This superbly animated children's tale is directed by Hayao Miyazaki, one of Japan's most beloved animators. The story follows Satsuke and Mei, two young girls who find that their new country home is in a mystical forest inhabited by a menagerie of mystical creatures called Totoros. They befriend O Totoro, the biggest and eldest Totoro, who is also the king of the forest. As their girls' mother lies sick in the hospital, O Totoro brings the sisters on a magical adventure but also helps them to understand the realities of life. Like most films released by Miyazaki's Studio Ghibli, this family-oriented feature has a powerful ecological theme. The English-language version of this film wasn't dubbed until many years later, explaining the presence of actors such as Dakota Fanning in the cast (who wasn't even born until 1994). ~ Jonathan E. Laxamana, Rovi

Tanie Kitabayashi
as Kanta No Obasan

Masashi Hirose
as Kanta No Otosan
View All

Critic Reviews for My Neighbor Totoro

Even the most amazing of the great Pixar films could be tagged with the label of "antiseptic." No one would use that for Totoro, which, especially if seen under optimum conditions, astounds with its vibrancy.

Despite these limits, My Neighbor Totoro is a gentle and affirming film.

Miyazaki's appreciation of miraculous possibilities and childhood visions is what drives Totoro.

Not as complex or tense as Spirited Away (Hayao Miyazaki's masterpiece, released 13 years later). Still, few things are.

Despite the cuteness, there's little in the way of icky sentiment - indeed the spectre of death hangs over the story - but it's a captivating world you won't want to come home from.

An emotionally true animated film full of whimsy and delight

On paper it may sound saccharine and lethally sentimental, but My Neighbour Totoro is nothing but wonderful and honest.

Miyazaki creates a universe where childhood and its perspective of the world is the rule, with the Japanese master highlighting, once more, his knowledge of children's psyche

A magic that, from the beginning of the action to the end, with Totoro or without him, delivers sublime 86 minutes of footage whose charm is impossible to resist. [Full Review in Spanish]

The theme of innocent love is so prevalent and it feels good to watch unconditional displays of it, even within an animated fictional film.

As simply as we can put it, My Neighbor Totoro is a masterpiece of children's animation. There's no one we wouldn't recommend it to.

Austin Trunick
Under the Radar
View All Critic Reviews (53)

Audience Reviews for My Neighbor Totoro

The film that launched legendary animation director Hayao Miyazaki on the road to success and there's a reason why: it is simply a delightful masterpiece that demonstrates Miyazaki at his absolute best. In terms of plot this flick can be summed up in a single sentence (Two innocent little girls move into a rural town where they encounter the lovable forest spirit: Totoro) and there are zero conflicts or villains to speak of. This sounds off-putting at first but upon watching; the simplicity of the plot is what contributes to Totoro's charm. Instead of focusing on plot, the film follows the various life situations faced by the film's adorable and lifelike little girls in the form of Satsuki and Mei. Most of the situations involve the two sisters settling down into their new homes and meeting their neighbors (both human and spirit). Sometimes the film is funny, sometimes it's scary, sometimes it's wondrous, and quite sad a few times but it all is held together by how it stays true to the essence of life in general. Kazuo Oga's beautiful background art gives great nuance to the forest settings and emits a warm nostalgic feel of nature's beauty. Even though some zany fantasy elements persist in the film (one highlight is the crazy but awesome cat-bus), the film never loses its sense of realism or emotional center. The big, silent, and playful Totoro is immediately endearing and it is very clear how he became the Winnie the Pooh of Japan. The animation is absolutely exquisite and the music is simply wonderful. Sure to leave a smile and warm fuzzy feeling in anybody (If it didn't then you have no soul).

No plot and a little slow, but super cute and fun.

An enchanting movie for children, so beautiful in its wonderful simplicity, innocence and sweetness that it feels like almost impossible not to be touched by such an adorable story devoid of clichés and with no need to rely on villains or contrived conflicts.

Not usually the biggest Miyazaki fan, but maybe I just needed to try out one of his kid movies. I could actually figure out what was going on in this one, and it was sweet and whimsical, if still a bit slow.