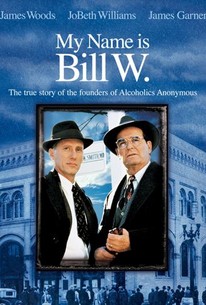 My Name Is Bill W. Photos

My Name Is Bill W reunited the stars of the highly acclaimed 1986 TV movie The Promise: James Garner and James Woods. This time Woods has the bigger role as the real-life Bill Wilson, who comes marching home from World War One with a "little" liquor problem. He drinks steadily throughout the Prohibition Era, but Wilson's habit doesn't catch up with him until he is ruined by the 1929 stock market crash. This disaster propels Wilson into flat-out alcoholism, costing him his family and his reputation. While drying out in detox, Wilson strikes up a friendship with Bob Smith (Garner), an alcoholic doctor. Through Smith's influence, Bill Wilson organizes a small band of chronic drinkers into what will eventually become Alcoholics Anonymous. The formation of AA consumes the emotional final third of My Name Is Bill W, which like its Garner/Woods predecessor The Promise was originally presented as a Hallmark Hall of Fame TV special.

Critic Reviews for My Name Is Bill W.

There are no critic reviews yet for My Name Is Bill W.. Keep checking Rotten Tomatoes for updates!

Audience Reviews for My Name Is Bill W.

Good dramatization of the start of AA.

My Name Is Bill W. Quotes