My Life as a Zucchini (Ma vie de courgette) 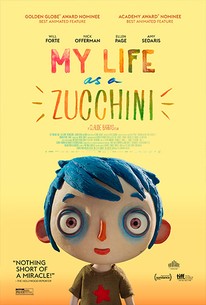 Critics Consensus: My Life as a Zucchini's silly title and adorable characters belie a sober story whose colorful visuals delight the senses even as it braves dark emotional depths.

Critics Consensus: My Life as a Zucchini's silly title and adorable characters belie a sober story whose colorful visuals delight the senses even as it braves dark emotional depths.

Critic Consensus: My Life as a Zucchini's silly title and adorable characters belie a sober story whose colorful visuals delight the senses even as it braves dark emotional depths.

My Life as a Zucchini (Ma vie de courgette) Videos

My Life as a Zucchini (Ma vie de courgette) Photos

After his mother's sudden death, Zucchini is befriended by a police officer, Raymond, who accompanies him to his new foster home, filled with other orphans his age. At first he struggles to find his place in this at times strange and hostile environment. But with Raymond's help and his newfound friends, Zucchini eventually learns to trust and love, as he searches for a new family of his own. Brought to life through striking character designs and expressive stop-motion animation, the story soars with laughter, sorrow, and joy, and stands as a testament to the resilience of the human heart. Beginning with its debut at Cannes, the film has stirred up an overwhelming response on the festival circuit, taking home top jury and audience prizes at Annecy, Melbourne and Angoulême, as it prepares to melt hearts in North America with its premiere at Toronto.

Will Forte
as Mr. Paul

With red frosted noses, sleepy bobble eyes, and oversize, oblong heads, the stop-motion munchkins of My Life as a Zucchini are figures approached with curious affection.

This isn't just good writing, it's humane and honourable. Every child here feels like a real human being, and as such is accorded a dignity the world invariably hasn't extended to them in their lives to date.

My Life as a Courgette isn't perfect (some of the adult characters lack nuance) but its attempt to redefine innocence is stirring.

It is a lovely little film, coming in at a novella-size 66 minutes.

Somewhere in the mysterious space between the script and the animation, My Life as a Courgette boasts moments of (yes, whisper it) essential human truth that will leave you floored.

It's a little masterpiece.

Zucchini dares to take on some fairly heavy subjects... but it does so with delicacy and compassion, showing the survival skills and resiliency of these expressive and intricately crafted characters. It's an exceptionally heartfelt offering.

As devastating as the film can be, it is also sublimely joyous.

Beautifully animated and incredibly sweet, it is an entertaining feature debut from [Claude] Barras.

A beautiful, poignant, exquisite gift of a film.

The movie possesses a naturalistic tone, style, sound and pace quite unlike anything else in the current world of animated film.

My Life as a Zucchini flies by in a scant 70 minutes but mines more depth of emotion than a drama twice its length. The nature of the production allows the disturbing script to deal with sensitive problems that might be off-putting in a live action movie. As performed with stop motion puppets the weighty issues take on a poignant charm. Sometimes children find themselves without a mom or a dad. The circumstances are many: some have passed on, others arrested, deported, or maybe they have just simply abandoned them. It's a heartwarming tale that doesn't sugarcoat the toughest thing a youngster may ever have to face. Yet somehow kids manage to weather the tribulations that life throws at them. The narrative delves into the need for a child, and anyone really, to feel loved. My Life As A Zucchini received an Oscar nomination for Best Animated Feature Film well before it was even available in theaters. Now it has been officially released and it's still pretty hard to find. I suspect most people will have to discover this lovingly crafted gem once it's available to rent. And please do seek it out. It's an unconventional delight. fastfilmreviews.com

Though it isn't really special, a lot of people will find it hard to resist this sweet and tender story full of heart about abandonment and friendship, given the realistic way it talks about its themes and its expressive characters made in a very lovely stop-motion animation.

My Life as a Zucchini (Ma vie de courgette) Quotes