My Italian Secret: The Forgotten Heroes (2015) 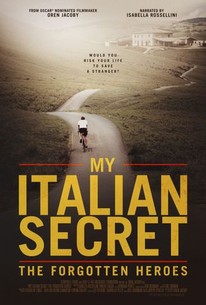 MY ITALIAN SECRET tells a heroic story that was all but lost to history, until now. The film recounts how WWII bicycling idol Gino Bartali, physician Giovanni Borromeo and other Italians worked with Jewish leaders and high-ranking officials of the Catholic Church, risking their lives by defying the Nazis to save thousands of Italy's Jews. Their high-risk methods were ingenious. Bartali, a Tour de France champion, criss-crossed Northern Italy transporting fake identification documents in the frame of his bicycle. A physician, Dr. Borromeo, invented a fictitious disease to scare the SS away from the hospital where he was hiding Jews. Others disguised Jewish girls and women as nuns and hid them in convents. In this epic documentary, living characters return to Italy to reveal their stories, and to thank those who were willing to sacrifice their own lives to save strangers without ever seeking recognition or reward for their courage. Oscar (R)-nominated director Oren Jacoby resurrects the dramatic story of this secret underground, giving it the attention it so richly deserves. (C) The Film Sales Company

Critic Reviews for My Italian Secret: The Forgotten Heroes

The anecdotal presentation sometimes seems more suited for museum browsing than for viewing in a theater.

Jaded viewers might think they more or less know the trajectory of its collected stories and perhaps they do, but the details are unusually rich.

For the impact of the Holocaust on Italy. . .fills in a gap with personal stories and return visits of Jews who were hidden. . . and about the extent of collaboration.

An important, emotionally engrossing and well-edited documentary about the true heroes of Italy during WWII.

There are no featured reviews for My Italian Secret: The Forgotten Heroes at this time.