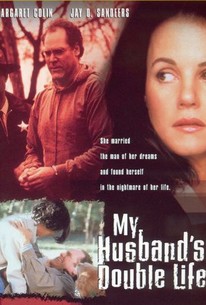 Ten years after the sudden and mysterious "death" of her husband, Patrick (Jay O. Sanders), Elizabeth "Peachy" Welch (Margaret Colin) comes into possession of disturbing evidence that Patrick may still be alive. Even worse, it appears that Patrick faked his death and has assumed a new identity -- and is now the patriarch of a whole new family. Angered over the fact that Patrick has forced her to live a hardscrabble life as a single mother for over a decade, Elizabeth prepares for a showdown with the man who left her and their children in an advanced state of financial ruin. An unexpectedly sentimental finale caps the made-for-TV The Familiar Stranger, in keeping with the factual story upon which the film was based. The production first aired over the Lifetime cable network on March 12, 2001.

Will Estes
as Ted Welsh

There are no critic reviews yet for My Husband's Double Life. Keep checking Rotten Tomatoes for updates!

What kind of man does something like this to his family? Elizabeth was so brave and strong - I couldn't imagine going through all that she did.