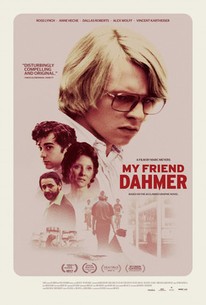 Critics Consensus: My Friend Dahmer opens a window into the making of a serial killer whose conclusions are as empathetic as they are deeply troubling.

Critics Consensus: My Friend Dahmer opens a window into the making of a serial killer whose conclusions are as empathetic as they are deeply troubling.

Critic Consensus: My Friend Dahmer opens a window into the making of a serial killer whose conclusions are as empathetic as they are deeply troubling.

Jeffrey Dahmer murdered 17 men and boys in the Midwest United States between 1978 and 1991 before being captured and incarcerated. He would become one of America's most infamous serial killers. This is the story before that story. Jeff Dahmer (Disney Channel's Ross Lynch) is an awkward teenager struggling to make it through high school with a family life in ruins. He collects roadkill, fixates on a neighborhood jogger (Vincent Kartheiser, "Mad Men"), and copes with his unstable mother (Anne Heche) and well-intentioned father (Dallas Roberts). He begins to act out at school, and his goofball antics win over a group of band-nerds who form The Dahmer Fan Club, headed by Derf Backderf (Alex Wolff, "Patriots Day"). But this camaraderie can't mask his growing depravity. Approaching graduation, Jeff spirals further out of control, inching ever closer to madness.

News & Interviews for My Friend Dahmer

View All My Friend Dahmer News

Critic Reviews for My Friend Dahmer

Although My Friend Dahmer does not resolve the impossible question of 'nature vs nurture', it approaches it with a humanity that is too often missing from such stories.

Isn't there something pathological about the way we privilege the pathological? If you can stomach the focus of My Friend Dahmer, you'll find this rewarding.

The whole assembly kit of Jeffrey Dahmer's dysfunction is laid out, and we can easily see how it all clicks together. The film might have risked more empathy for him, if that weren't the one thing he so signally lacked himself.

There's a hint of retrospective guilt here and you could question Backderf's morals, and by extension those of Meyers, for profiting from telling a murderer's origin story.

Films like My Friend Dahmer heighten the mystery rather than explaining it.

This superficial treatment of an American tragedy may pass as a condemnation of superficial American culture, but the opportunity to make a film as rivetingly creepy-compassionate as the comic has been blown.

It's a restrained and humane portrait of a killer and the community that raised him.

Emphasizes a very human sense of loneliness in Jeff, but it doesn't explore the sadistic element of domination with which his desire for companionship was entwined.

Marc Meyers does a fantastic job directing Backderf's intimate account of Jeffery Dahmer early years. His film can be viewed as both a sympathetic look at a troubled youth or a documentation of a prolific murderer...

My Friend Dahmer presents not only an examination of Dahmer himself, it gets into the ethics of Backderf's friendship with the soon-to-be cannibal murderer.

We eagerly disappear inside a perfectly decorated 1970's living room in order to catch a glimpse of this slow moving train as it inevitably derails.

Audience Reviews for My Friend Dahmer

A very interesting character study that does a fine job building a nuanced portrait of a high school outcast prior to becoming a famous serial killer, and it benefits from some good performances and a nice amount of subtlety that is essential for a film like this to work.

An excellent character story about a truly awful character. This is a very difficult subject matter to tackle, but Marc Meyers does an excellent job picking the right tone and frame of reference to study one of America's most notorious serial killers. Ross Lynch also does an excellent job in the role, and had a highly competent supporting cast. I suspect most people have a memory / feeling of that moment when they are dreaming and the austere sensation hits where their dream shifts into something more sinister. This is that moment before you fall, get caught or whatever nightmare you want to insert here. My Friend Dahmer lives in that space for a full hour or more. You watch this movie naturally tense, this sort of subject matter always starts with an uneasy sense of place and time. This film does a great job of sharing a glimpse into the impulses, motivations and spiral of events that molded one of history's worst. I think this movie really succeeds because it is not an apologist piece, a macabre stint into the grotesque, or the usual trapping some of these films fall in to. The film does not really revel in any particular aspect of Dahmer's life. It feels so genuinely real, and perhaps that makes it all the more impactful.