My Favorite Shapes by Julio Torres2019

My Favorite Shapes by Julio Torres (2019) 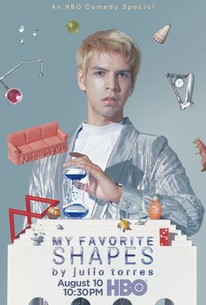 Comedian and "Space Prince" Julio Torres (HBO's "Los Espookys"; "Saturday Night Live") headlines his first hour-long comedy special on HBO. Taped before a live audience at Elsewhere in Brooklyn, this multimedia comedy show finds Torres exploring his favorite shapes, which include a plexiglass square, a triangle, an oval that wishes he were a circle, a self-conscious cactus and a Ferrero Rocher chocolate that Julio is mad at because she left her little skirt at home.

Critic Reviews for My Favorite Shapes by Julio Torres

It's definitely bizarre and a little abstract, to the point where there are moments you may wonder if you're the intended audience. To be honest, you might not be.

But for those who are really tickled by Torres's comedy, the special will become exactly what one of those precious, beloved objects is to him: something resoundingly idiosyncratic, with a personality that not everyone can see.

For all of his eccentricities, Torres also has plenty of material that's accessible to pretty much anyone.

Julio Torres might be the funniest person in the world today, and My Favorite Shapes is easily the best stand-up special in recent memory.

There are no featured reviews for My Favorite Shapes by Julio Torres at this time.