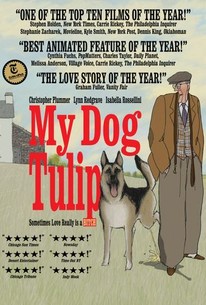 Critics Consensus: A beautifully animated diversion, My Dog Tulip is as comforting and delightful as cuddling with your own canine companion.

Critics Consensus: A beautifully animated diversion, My Dog Tulip is as comforting and delightful as cuddling with your own canine companion.

Critic Consensus: A beautifully animated diversion, My Dog Tulip is as comforting and delightful as cuddling with your own canine companion.

A bittersweet account of the author's 14-year relationship with his adopted Alsatian, MY DOG TULIP was written, directed and animated by award-winning filmmakers Paul and Sandra Fierlinger, and is the first animated feature ever to be entirely hand drawn and painted utilizing paperless computer technology. An official selection of the 2009 Toronto International Film Festival, MY DOG TULIP is based on the book by British author and distinguished man of letters J.R. Ackerley. Ackerley hardly thought of himself as a dog lover when, in middle age, he came to adopt Tulip - a beautiful, yet intolerable 18-month-old German shepherd. To his surprise, she turned out to be the love of his life, the ideal companion he had been searching for in vain. Originally published in England in 1956, My Dog Tulip is now published in the US by the New York Review of Books, and is the best-selling title in their Classics Series. In vivid and sometimes startling detail, the film reveals Tulip's often erratic behavior, canine tastes, and Ackerley's determined efforts to ensure an existence of perfect happiness for her. -- (C) New Yorker

News & Interviews for My Dog Tulip

Cats vs Dogs: Who Have The Best Movies?
Critics Consensus: Machete Is Trashy Fun

View All My Dog Tulip News

Critic Reviews for My Dog Tulip

Affably voiced by Christopher Plummer, Ackerley is at once enormously affectionate and beadily observan, while the clever graphic style marks the switch between straightforward narration and surreal doggy reverie.

In truth, it's boring.

Smacks first of obfuscation, then of desperation.

Rarely has a needy bond between human and pet felt more unsentimentally and perfectly observed.

Quirky and bittersweet, a treat for dog lovers and the dogless alike.

Is My Dog Tulip the best film ever about a dog? Is it Citizen Canine? My answer, yes.

This is no typical "boy and his dog" movie, this is a joyous and warmhearted work of art.

Like the book, the film is fiercely intelligent, funny, tender, and delightfully scatological. It is so thoroughly and naturally a film for adults that it makes live-action movies seem almost childish in comparison.

A tender and exquisite animation about one man and his dog which gets as close to what it is to love dogs as I've ever encountered.

A wonderful animated movie for anyone who's ever experienced dog ownership at its most glorious, and most embarrassing.

On and on the indefatigable Plummer talks, to the point that instead of his words endearing you to the film it begins to feel more like the cinema speakers are picking up interference from Radio 4.

We are treated to far too much detail about trying to house train Tulip and exactly when, where and how she relieves herself.

Audience Reviews for My Dog Tulip

Wittily narrated by Plummer this a cartoon that dog-lovers will adore but if you don't really appreciate the bond with your pet you may find it a little boring. The animation is very simple (similar to 'Yellow Submarine') but I found it a nice contrast to Disney and the film has a very British sensibility. The cartoon is an honest account of looking after and loving a pet and so therefore there are lots of scenes of the dog pooing and being on heat. After a while the scenes of trying to find a mate for Tulip begin to drag and the whole thing is probably 20 minutes too long but I still enjoyed it for trying to be different.

*** out of **** I've had two dogs so far in my lifetime. The first was named Chatom; I was born and then greeted by his natural warmth. He lived a good fourteen years and then passed away. A few years later; the family got Skipper, his name derived from my mother's flamboyant obsession with boating (skipper, for those who don't know, is just another word for captain). I loved both dogs; as a good owner should. I'll even admit to having some special sort of connection with each of them, and I'll tell you: the bond shared between a man/woman and his/her dog is a peculiar, fascinating, impeccable one. Given that I've had experience with dogs - as house pets and even as friends - it comes to no surprise that quite a bit of the material covered in "My Dog Tulip" - a wonderful adult animation based on the memoirs of author J.R. Ackerley - resonates with me and the rest of the dog-loving world. It's a bittersweet and often times touching story of a boy - and a very old boy at that - and his dog; told with compassion, humor, and a general understanding of human impulses and emotions. Since the story is indeed told as if it were a memoir; our narrator is Christopher Plummer, playing the role of Ackerley. He wants to tell us about his dog tulip; an animal that he loved for fifteen pleasant, wonderful, and insightful years. In return for his love towards the animal; the animal also loved him. The relationship is told through a short, sweet, and most definitely to-the-point story that only a guy like Ackerley could tell in the many interesting ways that he does. For starters, I suppose it's unique that he would tackle the subject of owning - and sharing a life with - a dog with a sharp sense of humor and wit; the kind that could indeed be the sole reason behind why "My Dog Tulip" has touched some and alienated others. Along the way from beginning (Tulip's adoption) to end (Tulip's death); there's jokes about bowel movements, a dog's sexual needs, urination, and of course - dog feces. While some of these things might come off as juvenile, they are presented here as all-too-human; the collective and unfiltered thoughts of the narrator, who Plummer gives the kind of animated personality that such a man would be required to have for this story. What can I say? I was touched, I suppose. By the end, the story comes full circle; and I'd be lying if I said I wasn't at least somewhat moved. Having owned that first dog of mine and been with him until the end, I can certainly relate to the kind of companionship that the two central characters here share. My guess is that most people can. But one common criticism, if there are any logical criticisms at all, would be the fact that "My Dog Tulip" also touches on the sad realization that Ackerley found his one love and one friend in that dog; romantic opportunities were everywhere, but he kept denying them, for he treated Tulip as if she were his lover. Therefore, he does not cheat. The movie is slow, sentimental, and true. It takes us through the good times and the bad times that a dog owner often experiences when caring for their animal of choice; Tulip is not what most would call a "good dog", in fact, the owner is forced to scold the beast rather harshly in some spots; but the thing about us human beings is that we know the value of a dog's unconditional love. You can stop loving a dog; but they shall always love you no matter what. That is how they are; and the best moments in the film are when Tulip shows great affection for her owner. Such moments were, to say the least, easy for a guy like me to identify with. While I love dogs to death - and also admire the deeply felt story at the center of the film - I can't say I absolutely loved it. I didn't have many problems with it; but if I have one major complaint, it's that "My Dog Tulip" failed to tug at my emotional heartstrings. Not many films can do that anyways, but since the story is so relatable, I kind of expected to be moved on a deeper level than I was. But then again, an emotional reaction is just that; and I felt something. That's probably more than a mainstream audience will ever feel from the movie; since it is unsuitable for them. The animation isn't of the highest quality - perhaps so that the story can step into the spotlight throughout - and the film never quite begs to be resonant. Yet, for those willing to see it through and admire it, there are indeed things to resonate with. "My Dog Tulip" is a gem of an animation that will probably continue to go unnoticed - since it still lies somewhere in obscurity - but I think it deserves attention and I hope that somehow, someday, and in some way; it shall find an audience that truly loves it for what it is.

Grumpy old man adopts idiosyncratic German Shepherd and they both lived happily ever after. Based on the book by J R Ackerley, beautifully animated and perfectly narrated by Christpher Plummer. More information about dog poo, wormings and the mating practices of dogs in heat than there was in Lady And The Tramp. "My Dog Tulip" is a bittersweet animated film of J.R. Ackerley's recollections of a dog he owned in the years during and after World War II when he no longer was a young man. But this is not just any dog. It is an Alsatian female, Tulip, that he rescues from a working class family that is apparently incapable of caring for it since they never took it for walks, leaving the dog's social sklls woefully underdeveloped. So dog and owner have their fair share of kinks to work out in their relationshiip but as time wears on and they get to know each other better, things go much smoother. "My Dog Tulip" is animated in a rough hand drawn style with occasional interludes that are even cruder looking, like they are directly pulled from Ackerley's sketch pad. It is almost as if he is writing the film as we are watching it. The only thing that might trouble potential viewers is the scatalogical details of Tulip's habits which at times definitely feel like too much information.(Also remember that the movie is set in a less civilized time when there were no pooper scooper laws.) Thankfully, this is not played for laughs but used as a way of showing how Tulip communicates with her owner, as she makes her feelings clear. Some of which actually reminded me of the family dog I had when I was growing up. All of which plays well into what the author is saying about the search for the perfect friend which he finds in a dog. But for me, a dog would not be perfect since they still have to be taken care of and looked after and that's not really the basis for any kind of healthy relationship.(Plus, I have killed off plants when I've tried to look after them.) On the other hand, as a friend put it, dogs may ruin your rug but they will not ruin your life, unlike children.